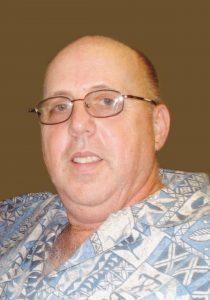 Ray was born on February 14, 1954, in Milwaukee, Wisconsin, son of Herbert and Myrtle (Schultz) Wlochal.

Ray and his family lived several places before moving to Dubuque, where he would graduate from Hempstead High School, Class of 1972. Ray was united in marriage to the love of his life, Robin Jones, on August 14, 1976. They met in Postville when they were teenagers and neither of them ever dated anyone else, they got it right the 1st time. He was a jokester and often lovingly referred to Robin as both his wife and his girlfriend. Ray was a quick learner and hard worker. He welded on bridges before landing a job with the Dubuque John Deere Works until the lay offs in the 1980's. Ray later went to work with Johnson Graphics and eventually Walmart, where he worked for over 20 years until his well earned retirement in 2016. He also put his talents to good use as a custodian at GracePoint Church. His family, along with his faith, were always his top priorities. Ray served as a Church Elder, Deacon and was a "perpetual volunteer". He was well known for never saying "no" to anyone who needed his assistance. Ray especially loved spending time with his family, and any chance he had to see the grandkids brought him great joy. He also enjoyed searching the countryside for unique Coca~Cola items to add to his collection, as well as attending concerts and hockey games. Ray was an outstanding role model for what a family man should be. He taught all of his children countless life lessons that will be passed on for generations to come. He will be deeply missed by all whose lives he has touched throughout the years.

Those left to cherish Ray's memory include

and many nieces and nephews.

Ray was preceded in death by his parents; his step-mother, Phyllis Wlochal; his step-father, Samuel Weipert; a brother, Edwin Wlochal; a nephew, Jesse Wlochal; several step-brothers and step-sisters; his brothers-in-law, Robert and Wayne Jones; and 2 sisters-in-law, Patty and Angie Jones.

Ray's family would like to extend a heartfelt thanks to his church family at GracePoint, as well as the nurses and staff of MercyOne Dubuque, for all of their care and support during this difficult time.