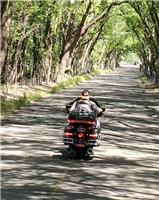 FUNERAL HOME
French Funerals & Cremations - University
1111 University Boulevard
Albuquerque, NM
On Sunday, January 10, 2021 we lost our beloved Rick (Ricky Pete). Beautiful husband and soul mate. The father to his only son, Phillip "Phillip Mignon" Vallejos, and dad to Kyle and Savanah. He was a proud owner of an upholstery business named N.V. Southwest Designs. If you can dream it, he can make it happen. His smile and his laughter were forever there. So contagious was that smile and laughter. He said laughter released endorphins, so he laughed often and watched programs that kept him laughing. He was a member of the Sons of the American Legion. S.A.L. That membership was possible through his grandfather, Gabriel C. Chavez. He was the State Road Captain in the American Legion Riders as well as the president of a brand-new chapter, Post 85 Chapter 29. As Rick would say, "Forever 29". This organization, and the job he did for the Veterans and Riders was done with love and passion. His best days were spent riding on his 2014 Electra Glide Ultra Limited side by side with his friends in the open air. But the love he had for his wife Iris, his children, and his family was undeniably true love, He loved his family and life itself with all his heart and he will be truly missed. He said before he passed to Kyle that "Sometimes it feels life is a mother fucker, but it all seems to work out one way or another." Rick was preceded in death by his daughter, Marisa Vallejos; father, Ricardo Vallejos; and his brother, Robert Flores.
He is survived by his loving wife, Iris; sons, Phillip Vallejos, and Kyle Baird and his wife M.J.; daughter, Savanah Salazar and her husband Adam; grandsons, Damian, and Jackson; mother, Sandra Padilla; step-dad (father), Tom Bernal; sister, Adrienne Griego; brothers, Matthew Flores and his wife Tiffany, and Danny; nieces and nephews, Madison, Kaitlyn, Tiana, Anthony, Dominic, Robert, Michael, Robert, Mariana, Luis, Danny and his children, Miranda, Alejandro, Arriyana; and many other nieces, nephews, aunts, uncles, and cousins. A Celebration of Rick's life will be held at a later date due to the pandemic.

"We will miss you Daddy Daffodil."

Below is The Rio Albuillo Story by Ken "Lucky" Nadeau

It was March of 2019, and after having already had a preparatory discussion regarding the planning for the NMALR Legacy Run, Rick sends me a message. He says that he's in a jam at work, Jim Bob is bugging about what he has planned for a ride, but he wanted my input for the 2- or 3-day ride. He also clearly tells me; as we know he was very committed to the task of being the State Road Captain and he loved it with passion; "PS, I don't want to let you down and I will get it done!!".

My response was simple: "Nope, it's down there, bordering the Bosque that runs east and west of the Rio Grande." That's it.. no other communication. Knowing what I do now, I can only imagine the level of anxiety and frustration voiced to Iris, and Rick's Chapter and close friends – Dan, Jesse, Jesus, and others while trying so hard to figure out the riddle presented by the State President and wanting so desperately to get it right. You all have my apologies for what I put you through – not. Although not my intention… it makes for one of the best events ever!

Fast forward a week later. I get a message from Rick – "I got a Bernalillo Deputy friend, and she has no idea where Rio Albulillo is. Can you give me directions in kindergarten form?" 10 minutes later, I get a phone call from Rick. He's somewhat panicked, and says in a rushed manner, "Dude, I don't want to disappoint you, and I'm trying to put this ride together; but I cannot find Rio Albulillo. I didn't want to look like I didn't know what I'm doing, but I'm trying to get this together for announcing at the Spring meeting and I don't want to get lost. I've had my law enforcement friend helping me and they can't find it. I asked Aaron and he says he's seen a sign for it but can't remember where. Where (the [email protected]#*) is Rio Albulillo?"

I couldn't help myself and very calmly tell him, "Rick, this is simple… you're in it." "What do you mean?" he asks. "Rick, Rio Albulillo is Rio Rancho, Albuquerque, and Bernalillo combined."… silence. And then a burst of laughter like only Rick could do. "Son of a bitch!!" We laughed until our faces hurt and there were tears.

Some couple of weeks later, as a result of having references in emails using the term Rio Albulillo synonymously with "LMFAO" in it; we were forced to explaining the whole story during our Spring meeting. The entire membership enjoyed the story completely and all enjoyed a great laugh.

Now, personally, I have been using the term "Rio Albulillo" for years. It's been my personal terminology for the combined run-on metro that now has combined the urban areas of Rio Rancho, Albuquerque, and Bernalillo together. Based on my own use, it became normal to me and I just assume others get it unless they ask right when I use it.

With much love. Cheers!