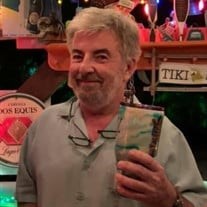 FUNERAL HOME
Curlew Hills Memory Gardens Funeral Home
1750 Curlew Road
Palm Harbor, FL
Richard Alan Barasso passed away September 19, 2021at his home with the love of his life, his wife, Debra Barasso.
Born in Concord, NH on August 2,1954 to Ruth (Towne) Barasso and Robert Barasso and was his Mother's "favorite" child and graduated from Concord High School in 1972. He was married to Debbie Barasso on October 24, 1981 and would have celebrated their 40th Anniversary. They made their home and raised their family in Manchester, NH and moved to Palm Harbor, Florida in 1994 where they opened a stencil shop and later filled numerous booths at Antiques and Uniques with all the treasures he had found during his Saturday morning picking.
Rick lived his life as a he chose, it was "Rick's World" and he always made time to host numberous gatherings at his Tiki Bar. He always wanted everyone to have a great time with lost of laughs. He never met a stranger.
Rick was blessed with four children, Tony Barasso (Casey), Megan Holland (Ty) Tina Vespi (Mark) and Bobby Bournival. He leaves 6 grandchildren, Hadley, Sophie and Piper Holland, Noah Wheeler, Declan Barasso and Dante Fraseir. His greatest joy in life was spending time in Williamsburg with his children and grandchildren and at his camper in Fredericksburg, Virginia, playing golf and sharing his time with his wonderful friends of Crystal Beach and New Hampshire, especially Fred Macallister of Franklin, NH and a lifelong friend Dennis Andeep.
He leaves a sister and brother in law Bonnie and Ed Malin of Gilford, NH. Not only were they siblings but best friends. His aunt, Doris Gifford of Concord, NH, a nephew, Mike Malin of Burbank, California and cousins Nancy Daley, Bob Hill, Bob Cheney Jr., Don Cheney, Paula Bailey, Penny Denoncour and Terri St. Laurent from the Concord Area as well as Pam Alfe, from Rochester, NY.
Rick was predeceased by his parents, his Aunts and Uncles, Bob and Marie Cheney and Roger and Pat Britton.
Published by Curlew Hills Memory Gardens Funeral Home on Sep. 21, 2021.
To plant trees in memory, please visit the Sympathy Store.
MEMORIAL EVENTS
Sep
24
Visitation
9:30a.m. - 10:30a.m.
Curlew Hills Funeral Home
1750 Curlew Road, Palm, FL
Sep
24
Funeral service
10:30a.m.
Curlew Hills Funeral Home
1750 Curlew Road, Palm, FL
Funeral services provided by:
Curlew Hills Memory Gardens Funeral Home
MEMORIES & CONDOLENCES
1 Entry
Debbie, Bobbi, Tina, & Tony - We are so sorry to hear of the passing of Rick. I hope you continue to feel comforted by the love and support of family and friends. Let us know if there is anything we can do for you or your family. Love, Steve & Kathie Burnell
Kathleen A Burnell
Friend
September 25, 2021
Showing 1 - 1 of 1 results