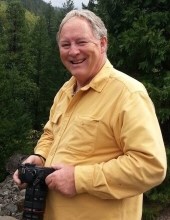 FUNERAL HOME
Mountain View Mortuary - Reno
425 Stoker Avenue
Reno, NV
Robert Raymond Blank
Robert Blank, beloved husband, father, and grandfather, passed away on Wednesday, August 18, 2021.
Bob was born to Frank and Rose Blank on October 9, 1950 in Milwaukee, WI.
He met his wife Ginny when they were attending the University of Wisconsin Stevens Point. They married in February of 1975 and lived in South Dakota where Bob worked as a soil scientist with the U.S. Department of Agriculture until moving to Idaho in 1980 where Bob earned his Ph. D. in Soil Science at the University of Idaho. In 1987, Bob and the family moved to Reno NV where Bob returned to USDA Agricultural Research Service as a research scientist. He was a well-respected in his field, well published, and a mentor to many. When he retired from the USDA after forty years in August of 2018, he was thrilled to be called back to the lab by the University of Nevada, Reno where he has worked part-time since.
Bob loved his family and with them enjoyed all things. He was a wonderful husband and an amazing father. Becoming a grandfather was icing on the cake and he so enjoyed spending time with Lily.
He enjoyed life: family card night, dancing every Friday, playing trivia at various venues, cookie day and family soup-off. He took daily hikes and was an avid photographer.
Bob is survived by his wife, Ginny, his son Bart and wife Grace, his daughter Amie and husband Bill Masciocchi, his son Micah and fiancée Katya Amchentseva and his granddaughter and best friend, Lily: his brother James and wife Sharon, his sister Pat, and his brother Frank and wife Carol and many nieces and nephews on both sides of the family.
He is preceded in death by his parents Frank and Rose.
A memorial service is being planned for Saturday, October 23rd, 2021 at 1:00 p.m. at Faith Lutheran Church here in Reno. Another memorial service will be held in Wisconsin in April.
To send flowers to the family or plant a tree in memory of Robert Raymond Blank please visit our Tribute Store.
Published by Mountain View Mortuary - Reno on Aug. 31, 2021.
To plant trees in memory, please visit the Sympathy Store.
MEMORIAL EVENTS
To offer your sympathy during this difficult time, you can now have memorial trees planted in a National Forest in memory of your loved one.
Funeral services provided by:
Mountain View Mortuary - Reno
MEMORIES & CONDOLENCES
5 Entries
We would like to send Ginny and all of Bob's family our deepest sympathy. Both of us enjoyed working with Bob in the ARS Soils lab for several years. He will truly be missed. You are all in our hearts.
Christopher and Lesley Morris
October 21, 2021
Dear Ginny, Bart, Grace, Lily, Amie, Bill, Micah and Kat, It is with a heavy heart to be writing this to you and attending Bob's memorial service this upcoming Saturday. Please know that Bob will be truly missed. I am grateful that you all have each other and additional family members for support - and to share the memories. All my love and Keep in touch, Fay
Fay Allen
October 18, 2021
Dear Ginny and Family, I am so sorry for your loss. Bob was a kind and sweet soul. I will always remember you and Bob sitting at your favorite table at Roxy's listening to Wally and I perform. You were great dancers and we appreciated you coming to support Gary, Bobby and I. Bob was a good man and I can't tell you enough how much he will be missed. Sincerely, Terry Gerard
Terry Gerard
Friend
October 8, 2021
Dear Ginny and family, My deepest condolences to you. Bob was an amazing man and will be dearly missed. My thoughts and prayers are with you.
shelby, From Sugar Pine Family Medicine
October 8, 2021
Dear Ginny and Blank Family, After working with Bob for 33 years, it was shocking and terribly sad to learn of his untimely passing. I will remember fondly all of our ARS coffee sessions and group field trips that occurred early in our careers there. I'll also remember the beautiful photographs taken by Bob that adorned our office building. I'm very sorry for your loss. Please accept my sincere condolences.
Bill Longland
Work
September 1, 2021
Showing 1 - 5 of 5 results