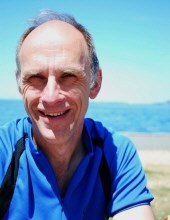 ABOUT
Edmonds High School
FUNERAL HOME
Beck's Tribute Center
405 5TH AVE S
EDMONDS, WA
Robert lived in hope through his journey of MDS/AML enduring treatment that fought to save his life. On Saturday, October 23, 2021, just after midnight, he passed into heavenly glory with his family surrounding him.
Robert's story began April 18th in Seattle, the firstborn of Robert and Florence Kutrich. He lived with his family in Northgate area before moving to Edmonds. He graduated from Edmonds High School in 1971.
Robert received his bachelors at SPC in 1976 with the unique distinction of creating his own with a blend of science and English to have a degree in Science Fiction. He married Lori in 1979 in Edmonds at Esperance Baptist Church. They made their home in Edmonds, but took a year soon after to move to Illinois for Robert to attend the graduate program in Communication at Wheaton College where he studied to develop his writing skill. Family and the Northwest drew them back home.
After Adam and Luke were born, Robert was led to pursue his engineering degree from SPU in 1988 with Kari joining in during those university years.
Robert spent the majority of his work career working for Washington DOT where he took on various roles related to his engineering degree. During this time life was full with raising children, enjoying their activities with them, church involvement, playing soccer and beginning his bike riding and kayaking adventures.
His rich faith legacy is passed on to his surviving family: his wife Lori and children and spouses: son Adam (Annie), son Luke (Ashley), daughter Kari (Kyle) and granddaughters Loli and Mila. He is also survived by his two brothers Thom (Laurie) and Jim (Lynda) and dear friends.
"I will continue to look heavenward". RFK
In lieu of flowers, donations can be made in honor of Robert to the MDS Foundation, Young Life (Sound Cities), Tent of Nations, or Seattle's Union Gospel Mission.
Published by Beck's Tribute Center on Oct. 27, 2021.
To plant trees in memory, please visit the Sympathy Store.
MEMORIAL EVENTS
Nov
13
Service
1:00p.m.
Edmonds Center for the Arts
410 - 4th Avenue N, Edmonds
Nov
13
Service
2:30p.m.
Community Christian Fellowship
615 Glen Street, Edmonds
Funeral services provided by:
Beck's Tribute Center
MEMORIES & CONDOLENCES
3 Entries
Robert was an amazing person to work with. Competent, kind, wonderful sense of humor and calm. He was the kind of person who lightened everyone's day. His contributions to WSDOT and the State of Washington include the I-405 and I-5 HOV lanes and ramp meters. I hope his family will find some comfort in the memories.e of the love and joy Robert brought to so many people's lives.
Susan Everett
Work
December 4, 2021
I didn't know Robert well, but he was always filled with respect with the person he spoke to. I knew him in WSDOT Utilities at the very end of my career at WSDOT. I went on a Utilities trip with him and it was a pleasure to be working with him. I have to admit, my husband died in May of this year and I am (possibly) overly sensitive on this subject! I wish the best for Rob's family and hope they can find some peace in their loss. In these difficult times, grief is big business. I have been exploring ways of managing grief. If you would like to hear of my discoveries you can contact me.
Lisa Siegel
Work
November 9, 2021
Robert, one of my all time favorite persons to have gotten the pleasure to work with. Why doesn't it surprise me that he created his own college degree. That is soooo Robert. My condolences to the entire Kutrich family. I am sure he has left you all with great memories and stories that will be told for generations.
Laura Brown
November 1, 2021
Showing 1 - 3 of 3 results