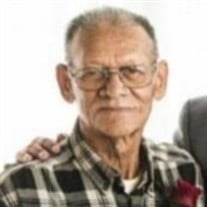 FUNERAL HOME
Ford Funeral Service, Inc. - Midwest City
305 S. Sooner Rd.
Midwest City, OK
Robert Sylvester "Jitter" Norwood Jr
Born January 23, 1939. Died November 27, 2021.
Robert (Jitter) Norwood of Oklahoma City, OK peacefully left this world on Saturday morning, November 27th, 2021. He was born to Robert Sr. and Edith Norwood and spent his childhood in the town of Millsboro, Delaware. Born into the Nanticoke Tribe, Jitter left Delaware as a teen to attend a Native American/Native Alaskan school in Lawrence, Kansas known as Haskell Institute where he graduated in 1957. It is at Haskell where Jitter developed his trade in which he worked tirelessly throughout his life to become an extremely gifted automobile paint and body specialist. This trade not only supported his own family, but was also his passion.
While at Haskell, Jitter met Ernestine Wilson. After graduation they both, as well as several other classmates, moved to California where they were married on August 20th, 1960. Together they had 4 daughters. The family resided in Norwalk California until moving to Oklahoma City, Oklahoma in 1975. As their four daughters grew, Jitter and Ernie managed to coordinate and attend most every event each daughter was simultaneously involved in. Countless practices, games and tournaments and Jitter still found time to be an active member of a pit crew of dirt track racing teams. In addition to his family and his trade, Jitter's other passion was car racing, from local dirt tracks to NASCAR. He was a true enthusiast.
Over the years, Jitter worked at different body shops as well as out of his own. Of note, he spent many years at BJ Body Works in Del City. He also spent many years at McConnell's Body Shop in Midwest City. The McConnell's treated him like family and we would like to extend a special Thank You. Jitter continued to work out of his shop from home until his health finally prevented him from doing so.
Jitter stayed active in Haskell alumni reunions, attending his grandchildren's activities as well as a few of his great grandchildren's activities. He loved to go watch his nephews race on Saturday nights. He was never too busy to enjoy sitting on his porch with family and friends and to listen to his radio. His home hosted many get-togethers over the years. He also enjoyed returning to Delaware to visit family. It was not unusual to hear him break out his favorite phrase "hot dog" when he got excited about something, do a half skip when he realized you have just pulled into his driveway, whistle no particular song just whistle, or pull that little black comb out of his pocket to smooth his hair back.
Robert "Jitter" Norwood was preceded in death by his parents Robert Sr and Edith Norwood; a brother Merril "Dinkle" Norwood, a sister Pecita Norwood Lonewolf and the love of his life, his wife Ernestine Wilson Norwood. He is survived by his 4 daughters, Roberta (Bobbi) Rains and Lee Moody of Del City Oklahoma; Sheila Norwood and husband John of Del City, Oklahoma; Norma Brown of Mustang, Oklahoma and Dewan (Paka) Faulk of Fort Worth, Texas; Grandchildren Bryan Pride, Rance Pride, Leroy Moody, Felicia Russell, Mariah Olazagasti, Skye Norwood, Brooke Lissolo, Cody Creek, Dailen Creek, Bradley Faulk and Trevor Faulk; and numerous great grandchildren, nieces and nephews as well as a sister, Odette "Detsy" Wright of Millsboro Delaware and a brother Lispinard "Splinter" Norwood of Oklahoma City, Oklahoma.
In lieu of flowers, the family would be honored by a donation to Alzheimer's Association. https://www.alz.org/
Published by Ford Funeral Service, Inc. - Midwest City from Nov. 29, 2021 to Jan. 4, 2022.
To plant trees in memory, please visit the Sympathy Store.
MEMORIAL EVENTS
Dec
2
Visitation
Ford Funeral Service
305 S. Sooner Rd., Midwest, OK
Dec
2
Service
Ford Funeral Service
305 S. Sooner Rd., Midwest, OK
Dec
3
Funeral service
Sunny Lane Family Church
4221 SE 41st, Del, OK
Funeral services provided by:
Ford Funeral Service, Inc. - Midwest City
MAKE A DONATION
Please consider a donation as requested by the family.
MEMORIES & CONDOLENCES
0 Entries
Be the first to post a memory or condolences.