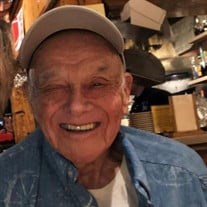 FUNERAL HOME
Sunset Funeral Homes - Northeast - El Paso
4631 Hondo Pass
El Paso, TX
Mr. Ronald Van Parys, 85, of Horizon City, TX, passed away peacefully in his home, surrounded by his family on October 14th, 2021.
Ron retired in 1999 after a long career at the Chicago Transit Authority. He enjoyed travelling to tropical areas and scuba diving with his wife Irene and spent many extended vacations with her in Mexico. He also was fond of a good meal and a few drinks with family and friends. He spent recent time with his friends at the American Legion #598 in Horizon City. Ron was especially proud of serving in the US Army as a young man.
Ron was preceded in death by his parents Raymond and Alma Van Parys and his beloved wife Irene. He is survived by his sons Terry (Kathy) Van Parys and Michael Van Parys, daughter Debbie (Joe) D'Elosua, three grandsons, Michael (Laurie) Van Parys, Carlos Van Parys and Kristopher (Dawn) D'Elosua and great-grandchildren Mason, Madison & Makayla Van Parys and Sebastian Cellum and Ace D'Elosua.
In lieu of flowers, memorial contributions can be made to your Humane Society, in his name, to commemorate his love of our four legged friends.
Published by Sunset Funeral Homes - Northeast - El Paso from Oct. 15 to Oct. 19, 2021.
To plant trees in memory, please visit the Sympathy Store.
MEMORIAL EVENTS
To offer your sympathy during this difficult time, you can now have memorial trees planted in a National Forest in memory of your loved one.
Funeral services provided by:
Sunset Funeral Homes - Northeast - El Paso
MEMORIES & CONDOLENCES
0 Entries
Be the first to post a memory or condolences.