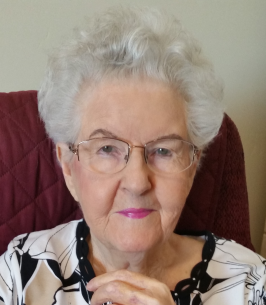 FUNERAL HOME
White-Reynolds Funeral Chapel
2466 Addison Ave East
Twin Falls, ID
Ruth Geraldine Harris, 91, of Twin Falls, peacefully passed away on August 6, 2021 at Ashley Manor in Twin Falls, Idaho.
She was born the youngest of 6 siblings, including her twin sister, on October 11, 1929 in Buhl, Idaho to Walter and Bertha Ferguson. Ruth's siblings were all quite older than the twins, so the two of them had a very close relationship. Ruth grew up living on the farm while her dad worked as a migrant worker moving them farm to farm. One of Ruth's special years was in 1947 when she graduated from Buhl High School and married her high school sweetheart, Bill Harris. After trying to have children for many years, they adopted their daughter, Margo and surprise, eight months later she gave birth to their other daughter, Connie.
The family moved to California while their girls were in elementary school, but she always returned to Twin Falls in the summer to visit family. She enjoyed sewing and was always making the girls matching outfits, even when the girls were in their 30's, she made the three of them matching outfits to go out in. Ruth was a housewife up until the girls were raised and on their own. She ventured out then and bought the first and only Diet Center in Orange County, California. This was a great business as it helped many people with their weight management including her husband's. In Ruth's spare time she loved doing paintings of China dishes and oil paintings. She was also an avid golfer through the years and even achieving a hole-in-one. She was very proud of that success, especially since Bill never got one and would tease him about it. Ruth was a very special one-of-a-kind gal and who will be greatly missed.
She was preceded in death by her parents Walter & Bertha Ferguson, her husband Bill Harris, and her 6 siblings. She is survived by her daughters, Margo (Bruce) Guffey of Twin Falls and Connie (Dave) Grubbs of Texas.
Services will be held at 11:00am on Saturday, September 18, 2021, at White-Reynolds Funeral Chapel, 2466 Addison Ave. E. in Twin Falls, Idaho. Family & Friends are invited to attend a reception following the service.
The family would like to thank the staff at Brookdale Assisted Living and Ashley Manor for being so loving and caring.
Published by White-Reynolds Funeral Chapel on Oct. 18, 2021.
To plant trees in memory, please visit the Sympathy Store.
MEMORIAL EVENTS
To offer your sympathy during this difficult time, you can now have memorial trees planted in a National Forest in memory of your loved one.
Funeral services provided by:
White-Reynolds Funeral Chapel
MEMORIES & CONDOLENCES
2 Entries
May God bless you and your family in this time of sorrow.
Rena
October 18, 2021
Offering our deepest condolences during this difficult time.
Reynolds Funeral Chapel
October 17, 2021
Showing 1 - 2 of 2 results