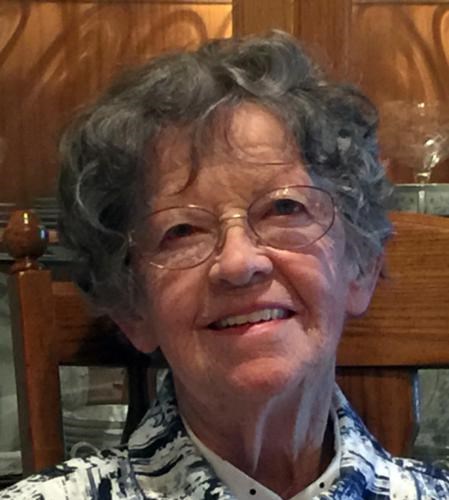 FUNERAL HOME
Weeks' Funeral Home
451 Cemetery Road
Buckley, WA
Ruth May Nelson, age 90, passed away October 1, 2021. Born in Everett, WA on October 7, 1930 to Richard and Naomi (Errington) Bos, she graduated from Everett High School in 1948. After moving with her family to Anchorage, Alaska, and then to Seattle, Washington, she helped care for her siblings, as she was the oldest. She married James Allen Nelson, a Boeing technician, in Seattle on June 7, 1958 at First Covenant Church, and they lived in Seattle until buying a home in Federal Way. They attended Midway Covenant Church in Des Moines where she was a Sunday School teacher, Junior Church director, and treasurer of the Covenant Women's group.
Ruth enjoyed using organizational skills, always looking ahead to what she or her family needed. Starting after high school at a department store in Everett, to an insurance company, then the Underwood Corp. in Seattle, the US Army Corp of Engineers in Anchorage, and then back to Seattle to work for Pacific Fruit and Produce, her typing and office management skills were shining! When at Washington Natural Gas Company in Seattle as a secretary to the Vice President, she and Jim began their family.
She found time to go to Mississippi College in Clinton, MS and after marriage and family, she and Jim both attended Highline Community College, each earning degrees. While working on her Associate in Applied Science at Highline, she was commended for high scholastic achievement twice and went on to complete more than 2 years of classes at the University of Washington.
Ruth became Library Aide at Olympic Junior High School. About that time Jim and Ruth became members at Kent Covenant Church, and made many friends there – then moved to Kent. In 1977 she sought a full-time position working for the US Government. She worked briefly for the FAA, then at the Air Force Plant Representative Office (later called Defense Plant Rep. Office) located at the Boeing Co. plant in Kent. She received a Sustained Superior Performance Award while working there. They saw their two girls graduate and get married, and then built their retirement home in Buckley, WA, in 1990.
Ruth retired in 1994 and devoted her energies to Jim, their children, and grandchildren as well as her lifelong hobbies of gardening and pets. She had an eye for beauty inside and outside and cultivated these loves in new and special ways including: landscaping 2 acres around their home in Buckley (not to mention she had done this in Federal Way and Kent too!), painting their house inside and out multiple times, growing dahlias (entering flowers at the Puyallup Fair), and caring for their beloved dogs. She and Jim became members of Bethany Baptist Church in Puyallup, enjoying the comradery in the senior's group.
Preceded by husband Jim (married for 55 years) and brother Richard "Dick" Bos, Ruth is survived by sister Roberta Nelson of Springfield, MO, brother Charles John Bos of Zuni, VA, daughter Karen Reinbolt (Doug) of Buckley, daughter Terri Jordan (Mick) of Port Orchard, WA, granddaughter Cassie (Reinbolt) Turner (Devin), and grandson Roy James Reinbolt (Reyannah) of Coeur d' Alene, ID, as well as 3 great-grandsons.
Ruth's family would like to thank Wabash Church for making her so welcome in her last years, and Dawn Zejavac and her family, the staff and residents at Lakeside Manor AFH in Enumclaw, WA, for their care and concern that made her so happy there.
A Memorial Service will be at Wabash Presbyterian Church, 18325 SE 384th St., Auburn, WA 98092 on Saturday, October 23rd at 11:00 AM. Please share a memory on the Tribute Wall. To send flowers to the family or plant a tree in memory of Ruth Nelson, please visit the floral store.
To send flowers
to the family or plant a tree
in memory of Ruth, please visit our floral store.
Published by Weeks' Funeral Home on Oct. 21, 2021.
To plant trees in memory, please visit the Sympathy Store.
MEMORIAL EVENTS
To offer your sympathy during this difficult time, you can now have memorial trees planted in a National Forest in memory of your loved one.
Funeral services provided by:
Weeks' Funeral Home
MEMORIES & CONDOLENCES
0 Entries
Be the first to post a memory or condolences.