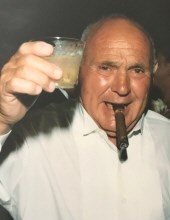 ABOUT
Naperville Central High School
FUNERAL HOME
Overman-Jones Funeral Home
15219 South Joliet Road
Plainfield, IL
Salvador "Sal" Ferreri, age 90, a resident of Plainfield, IL and Scottsdale, AZ, passed away peacefully on October 9, 2021, surrounded by the love of his family. He was born on March 6, 1931 in Lisle, IL.
Sal is survived by his beloved wife of 57 years, Jan Ferreri; his loving children, Kim (Dale) Hurley of Plainfield, Sam Ferreri of Arizona, Fran Ferreri of Arizona, Toni (Jason) Conner of Plainfield, and Lupe (Craig) Ford of Plainfield; his cherished grandchildren, Briehan and Johnathan Hurley, Jake, Maddox and Lexi Conner, Jocey and Sadie Ford; his brothers, Bill (Joanne) Ferreri and Andy (Jane) Ferreri; as well as many nieces and nephews.
He was preceded in death by his son Randy Ferreri; and parents, Samuel and Margaret Ferreri; his sister, Phyllis (the late Fritz) Brown and brother, Chuck (the late Shirley) Ferreri.
Sal attended St. Peter and Paul Grade School and Naperville Central High School where he played football and was known for scoring the first touchdown on the new field. After graduation he entered the U.S. Airforce. He worked on aircrafts, learned the trade of sheet metal, and served in the Korean War.
Upon returning from the service, Sal began working as a sheet metal worker for Local 265. He married Janice and moved to Plainfield where they raised six children. When Sal was not working, he could be found helping someone in need or raising money for Muscular Dystrophy by collecting cans or organizing fundraiser events. Sal was a lifetime member of the American Legion Marne Post 13 and went on to manage the organization for many years before retiring to Scottsdale, AZ in 1994.
During retirement, Sal took on many new endeavors such as working at the neighboring Golf Course, managing rental properties, and serving on the board of his Homeowners Association. He was forever busy fixing everyone's everything.
Sal enjoyed playing golf and watching his Grandchildren play sports. He loved his cigars, Canadian Club, Friday Night Fish Fries, and truck rides with his faithful dog Mutt.
Sal will be remembered for his strong dedication to family, his extraordinary work ethic, and his good-hearted helpful nature.
For those who would like to leave a lasting tribute to Sal's life, memorial donations may be directed to Shrine of The Divine Mercy (www.thedivinemercy.org), the Eternal Word Television Network (www.ewtn.com), or a charity of one's choice.
Family and friends will gather for the Mass of Christian Burial on Friday, October 22, at 11:00 AM at St Mary Immaculate Catholic Church, 15629 S. Route 59, Plainfield. Inurnment with military honors will follow at St. Mary Immaculate Cemetery, Plainfield. A Celebration of Life Reception will follow on Friday, October 22, 1:30 until 6:30 PM at the American Legion Marne Post 13, 24741 W. Renwick Rd., Plainfield.
Overman-Jones Funeral Home & Cremation Services, Plainfield is entrusted with arrangements.
To send flowers to the family or plant a tree in memory of Salvador "Sal" Ferreri please visit our Tribute Store.
Published by Legacy on Oct. 15, 2021.
Legacy.com reports daily on death announcements in local communities nationwide. Visit our funeral home directory for more local information, or see our FAQ page for help with finding obituaries and sending sympathy.
To plant trees in memory, please visit the Sympathy Store.
MEMORIAL EVENTS
To offer your sympathy during this difficult time, you can now have memorial trees planted in a National Forest in memory of your loved one.
Funeral services provided by:
Overman-Jones Funeral Home
MAKE A DONATION
Please consider a donation as requested by the family.
MEMORIES & CONDOLENCES
0 Entries
Be the first to post a memory or condolences.