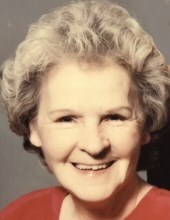 ABOUT
Logansport High School
FUNERAL HOME
Fisher Funeral Chapel & Cremation Services - Logansport
1801 Chase Road
Logansport, IN
Shirley Ann Martin, 92, Logansport, passed away peacefully on Monday, November 22, 2021, in Miller's Merry Manor.
The youngest of eight children, Shirley was born September 27, 1929, in Logansport, to the late John Quincy and Bernice (Thompson) Atwood.
Shirley was a 1947 graduate of Logansport High School.
On August 25, 1948, in Cass County, she was married to Kenneth Gene Martin. He preceded her in death on September 22, 2008.
A "homemaker" does not begin to describe Shirley's role in life - she was totally devoted as a wife, mother and grandmother. She was an exceptional cook who managed a houseful of children with ease. Her hands were always busy whether it was working on cross-stitch or sewing projects or one of her many craft projects. Shirley also loved gardening, especially growing flowers. Her love for friends and family knew no bounds. Given her first name, Shirley was an avid collector of Shirley Temple dolls.
As a child, she grew up in the Ninth Street Christian Church. When her husband worked as the maintenance man at church, she was his helpmate.
She is survived by six children, Janet (Mike) Fread, of San Diego, Judy (Jerrie) Burkhart, of Logansport, Carol Williams, of Lafayette, Steve Martin, of Logansport, Misha (Mark) Leslie, of West Lafayette, and Laurie (Tom) Peake, of Fairfax, Virginia; ten grandchildren, Bobby Masters, James (Ana) Fread, Corey (Erin) Burkhart, Kris (Heather) Morris, Marisa (Josh) Sietner, Kelley (Vince) Riedy, Morgan Leslie, Madison Leslie, Sam Peake, and Eric Peake; seventeen great-grandchildren; and seven great-great-grandchildren.
In addition to her husband and parents, she was preceded in death by siblings, Jean Tocco, Valerie Frushour, May Lewellyn, Bob "Robert" Atwood, Jim Atwood, and John Atwood.
A Funeral Service celebrating Shirley's life will be held at 11 a.m.on Friday, November 26 in the chapel at Ever-Rest Memorial Park.
Burial will follow in Ever-Reset Memorial Park
Memorial contributions may be made to the Alzheimer's Association.
Arrangements have been entrusted to Fisher Funeral Chapel. You may share memories and offer condolences on Shirley's Tribute Wall at www.fisherfuneralchapel.com
To send flowers to the family of Shirley Ann Martin please visit our Tribute Store.
Published by Fisher Funeral Chapel & Cremation Services - Logansport on Nov. 24, 2021.
To plant trees in memory, please visit the Sympathy Store.
MEMORIAL EVENTS
To offer your sympathy during this difficult time, you can now have memorial trees planted in a National Forest in memory of your loved one.
Funeral services provided by:
Fisher Funeral Chapel & Cremation Services - Logansport
MAKE A DONATION
Please consider a donation as requested by the family.
MEMORIES & CONDOLENCES
0 Entries
Be the first to post a memory or condolences.