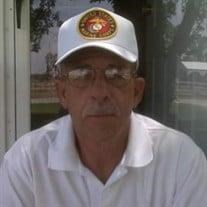 FUNERAL HOME
McFarland Funeral Home
1001 W 5Th St
Owensboro, KY
Steve Skinner, 70, of Evansville, passed on June 22, 2021, in his home under the care of Hospice of Western Kentucky, surrounded by family and loved ones. He was born in Evansville, Indiana to the late Lonnie and Louise Skinner. Steve served our country as a United States Marine and later worked in the Carpenters Union, from where he later retired. He was a member of the local VFW Post 696 and Amvets Post 75. As an avid outdoorsman, Steve enjoyed fishing, hunting, four-wheelers, and was not afraid to get his hands dirty. You could also often find him at Panther Creek Golf Course swinging his clubs. As a man of God, Steve possessed a strong faith. His relationship with God was personal and cherished in his life. He loved, and he loved deeply.
Along with his parents, he was preceded in death by his brother, Robert Skinner, and his sister, Darnella Skinner.

Left to cherish his memory is the mother of his children, Kathryn Skinner, his daughter Spring (Josh) Mullins, his son Steven (Christy) Skinner, his sister, Lonnie Louise, along with seven grandchildren: Garrett, Wyatt, Kian, Aidan, Liah, Samuel, Joshua, and one great-grandson, Everrett. Along with his companions and caretakers, Sherry, and Rebecca Asdell.

Donations for funeral expenses can be made by following the link below:
https://gofund.me/c37a6aa3
Published by McFarland Funeral Home on Sep. 22, 2021.
To plant trees in memory, please visit the Sympathy Store.
MEMORIAL EVENTS
To offer your sympathy during this difficult time, you can now have memorial trees planted in a National Forest in memory of your loved one.
Funeral services provided by:
McFarland Funeral Home
MEMORIES & CONDOLENCES
0 Entries
Be the first to post a memory or condolences.