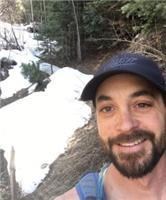 BORN
1982
DIED
2021
ABOUT
Woods Cross High School
FUNERAL HOME
Russon Brothers Mortuary - Bountiful
295 N. Main St.
Bountiful, UT
Terry James Bastian, born June 23, 1982 in Bountiful, UT with a spirit bigger than life, passed away on February 15, 2021. He was born to mother Katherine Kingston and father John Bastian and grew up with three sisters and one brother. Terry attended Woods Cross High School for most of his high school years and graduated from Mountain High School in 2000. Throughout his life Terry loved the outdoors and had an adventurous and free spirited soul. His smile was infectious and could light up a room. When Terry loved, he loved fiercely, with his whole heart. Having Terry in your life made your life better.

Although Terry had struggles, like everyone does, he was constantly striving for self improvement. His quest for something bigger and better led him to several different careers and gave him the ability to continuously reinvent himself. He was fearless and embraced change. After living in various cities and states, Terry realized the place he wanted to settle down and live his life was in northern Utah, surrounded by family and friends.

Terry is survived by his beloved daughters, Olivia and Etta, who were both the light of his life, as well as loving parents, grandparents, siblings, aunts, uncles, cousins, nieces, nephews, and life-long friends. Terry was taken from this world much too early and will be dearly missed by all. Terry once said that if he ever passed away he would like to return as a bald eagle to soar the earth. Every time you see a bald eagle soaring the land let it bring a smile to your face and know that Terry is still with you and smiling down on you.

A private service will be held for close family only due to the current state of the pandemic.