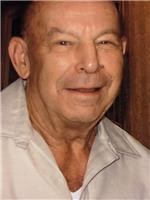 Thomas Richard Hamilton of Layton passed away on October 16, 2020, at his home of complications from heart failure and COPD. He was born in Wauwatosa, Wisconsin on February 2, 1934 to Annette Holonic and Earl Hamilton. In 1952 he graduated from Rufus King High School in Milwaukee Wisconsin and Park College in Parkville, Missouri in 1967 with a degree in Economics and Business Management.

After high school Tom enlisted in the U.S. Air Force and was stationed in England where he met the love of his life, Catherine (Kitty) Louisa Pursey, at the Lyceum Dance Hall in London, England. They were married at St. Anselm and St. Cecilia Catholic Church in London on February 11, 1956. They were married for 50 years before she passed away in 2006.

During his military career he was stationed in England, Florida, Idaho, Utah and California. He was a flight engineer on the C130 (C141) cargo planes and was often deployed to various countries in the world. He would return with beautiful gifts for his family from places like Thailand, the Philippines, and Japan. In 1969 he served a year in Vietnam and received several prestigious medals including a "Distinguished Flying Cross," for "heroism or extraordinary achievement while participating in an aerial flight".

In 1972 after 20 years, Tom retired from the USAF and he and Kitty decided to return to Utah to raise their young family. They built a home in Syracuse and later relocated to Layton. Tom started his second career as a mailman for the US postal service in Salt Lake City. He always said he was lucky to have loved both of his jobs. After retiring he worked part-time delivering pizza to schools in Davis County and delivering for Meals on Wheels.

He had a full and busy life between family, job and his hobbies which included: painting cars, rebuilding Volkswagen beetle engines, going to swap meets and garage sales. He would spend hours in his garage puttering. He was proud of his yard and home.

He and Kitty loved traveling in their motorhome to Yellowstone, Canada and numerous places in the western United States. Tom loved to cook chili, spaghetti, stew and chow mein and could be found cooking anytime day or night. Tom loved little dogs and always had a poodle or shih tzu by his side.

Our parents ensured we (their children) grew up with all the privileges and comforts that were absent in their own lives. Both of our parents were born into poverty, and endured many hardships growing up. Kitty survived the bombing of London by German Forces in WWII, and had a vivid memory of those horrors. Tom grew up in a disadvantaged family, losing his mother at the age of 14. Tom fended for himself as a young man. Tom and Kitty worked tirelessly to ensure we had a stable home, and a life void of the hardships they endured. We are forever in their debt, and grateful to have been born to such selfless and wonderful people.

On January 7, 2007 Tom married Connie Lott in Farmington, Utah. Connie brought happiness and love in the final chapter of Tom's life, for which we are very thankful.

Tom's family would like to thank Inspiration Hospice for their care of Tom.

A graveside service for family and friends will be held on Thursday, October 22, at 1:00 p.m. at Lindquist's Memorial Park at Layton, 1867 No. Fairfield Road.