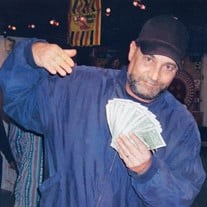 FUNERAL HOME
Kidwell-Garber Funeral Home
417 Silvey Rd
Laurie, MO
Tom Stallone, 71, musician, jokester, and proud Sicilian passed away at his lake house on Sunday, June 27th after a hell of a fight with lung cancer. The world will never be the same.

Tom was born on August 7, 1949, in St. Louis, Missouri. He was the only child of the late Anna Marie (Stollhans) and Tom Stallone. Tom attended St Casimir elementary school and graduated in the class of 1967 from Rosary High School. He played football for the Rebels and joined the Military Reserves after graduation.

MUSIC defined Tom Stallone. He was a talented pianist and trumpet player. Tom attended The Music Institute of St. Louis and played in a handful of St Louis bands including The Skeptors, Cecil Davis and the Epics and Harvey Wallbanger among others.

Tom continued to be a music enthusiast (to say the least!) even after his playing took a backseat in later years. He was always on the lookout for live bands and often planned trips around headliners. Tom didn't just listen to music, he felt it. And he could not sit still when watching the horns section. Tom made sure his parties always had a kicking band and threw money down to extend their set to keep the party alive.

Tom spent 31 years at Southwestern Bell before retiring. He was so proud of his installation and repair crew fondly called the "Stallion Batallion". Tom loved talking business and jumped at the opportunity to share his stories with middle school students through Junior Achievement. He loved his job for many reasons, one of those being it was where he met his wife, Patricia.
And anyone who knew Tom will understand that Patricia Stallone truly survived her husband. Tom initially caught her fancy at Southwestern Bell (where they both worked) with his snazzy dressing style and Tom Selleck mustache. Tom and Pat married in 1991 and bought a minivan soon after to pack up their merged family on summer vacations. They moved to Lake of the Ozarks in 2004 to live out their life dream of open access to water, friends and live music.

Tom liked played games or gambling and loved a good joke. He was generous and really got a kick out of giving gifts or planning surprises. Tom was an animated storyteller who used his hands to emphasize a point. He created his own slogans, and those around him picked up his "Tom-isms." Tom saw an opportunity to combine his ability to "tell it like it is" with a hidden crafty side that emerged during his later years. He merged these interests to pump out a surprising number of original wood signs. Tom's signs, found at https://leahstallone.wixsite.com/website can be found in the homes of friends and family, nearby restaurants and along the road leading to his house in Sunrise Beach.

Tom's surviving children include Elizabeth (Michael) Lowder, Leah Stallone, Brian Rakers and Dana Rakers. His grandchildren dubbed him "Old Tom" and include Claire Lowder, James Lowder, Aiden Rakers, Aubrey Rakers and Carter Johnson. Tom will be greatly missed by cats, Bobo and Marcello, and his dog, Angelo Stallone. And yes, Tom named all of the pets.

Cremation arrangements are under the care and direction of the Kidwell-Garber Laurie/Sunrise Beach Chapel.
Published by Kidwell-Garber Funeral Home on Jun. 28, 2021.
To plant trees in memory, please visit the Sympathy Store.
MEMORIAL EVENTS
To offer your sympathy during this difficult time, you can now have memorial trees planted in a National Forest in memory of your loved one.
Funeral services provided by:
Kidwell-Garber Funeral Home
MAKE A DONATION
Please consider a donation as requested by the family.
MEMORIES & CONDOLENCES
2 Entries
I knew Tom when we were kids in St. Casimir's parish in north St. Louis county. I went to Rosary High School with him. Great guy who I bummed around with. He was one of the three "barbecue butchers." That incident was one of the greatest times I had with him. Great horn player, too. See ya later buddy.
Biull Roach
July 5, 2021
I am so sorry to hear of Tom's passing. He was a heck of a good guy and I always enjoyed his conversation, his kindness and hospitality. I will always remember him fondly. I will keep you all in my prayers. May his soul and all the souls of the faithfully departed rest in peace.
John Schisler
Friend
June 29, 2021
Showing 1 - 2 of 2 results