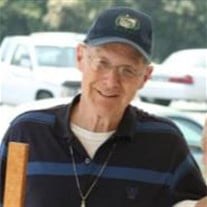 FUNERAL HOME
Thomas Poteet & Son Funeral Directors - Augusta
214 Davis Road
Augusta, GA
Lt Col Vern Joseph Simon, of Evans, Ga passed away on September 30, 2021. Colonel Simon is survived by his loving wife, Mavis Ann, and five daughters, Mary Beth, Katherine Ann, Susan Marie, Sharon Lee, Patricia Lynn and their husbands, 16 grandchildren and 2 great grandchildren.
Vern was born and raised in Saxon, Wisconsin and after completing college, he married, and entered the Army Medical Service Corp as a Clinical Chemist. After completing several advanced degrees he managed the Pathology Laboratories during the following years in a number of locations.
During his career in the military he served extended tours with his family in Germany, Japan, Panama and a short tour in Vietnam. His assignments in the states included a variety of locations which concluded with his retirement at the Eisenhower Army Medical Center at Fort Gordon in Augusta, Georgia. After leaving the military he was employed at the Medical College of Georgia in Augusta as a professor, recruiter, mentor and manager of the Outpatient Laboratories.
Since the early 1970's he worked tirelessly in his defense of the unborn. He developed numerous and diverse programs in an effort to educate children, families and future educators regarding the sanctity of life. He is perhaps best known as the founder of the Greater Augusta Right to Life Chapter and served as its President for many years. He also founded MCG students for life and the High School ProLife Oratory program. He was instrumental in the creation and promotion of Natural Family Planning services at what was once St Joseph's Catholic Hospital.
In October of 1990 he began the monthly ministry of praying a special Pro Life rosary written by Father Mark Ross at the now defunct Planned Parenthood. From this ministry many other ministries came to life and continue to this day. His humility in the service to the unborn is an inspiration to many people that continue this sacred mission. He was a warrior for life.
In lieu of flowers, memorial contributions may be made to Pregnant Choices at https://greatnonprofits.org/org/pregnant-choices.
Those that are unable to attend the service will be able to watch the live stream at https://www.st-teresa.com/funeral.
Published by Thomas Poteet & Son Funeral Directors - Augusta on Oct. 5, 2021.
To plant trees in memory, please visit the Sympathy Store.
MEMORIAL EVENTS
Oct
8
Rosary
1:00p.m.
St. Teresa of Avila Catholic Church
Oct
8
Memorial Mass
1:30p.m.
St. Teresa of Avila Catholic Church
Funeral services provided by:
Thomas Poteet & Son Funeral Directors - Augusta
MEMORIES & CONDOLENCES
0 Entries
Be the first to post a memory or condolences.