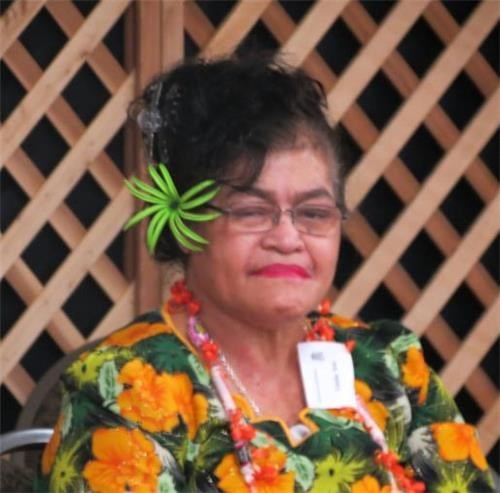 She grew up on the Islands of Samoa as one tough spirited soul, a dedicated hard worker on the family land and the plantation, harvesting crops and food and goods for her family. She grew up hard and had endured a lot as a young girl. And with strong and striking features, being half German/Samoan, she was physically strong, extremely fearless, and was fiercely protective of her family and children.

In her early adulthood years, her and her husband and young children relocated to the United States. Where she was able to flourish and raised her family and children. She worked just as hard and retired as a substitute teacher.

A dearest mother to her 9 surviving children, and her 5 deceased children. Her duties ended unexpectedly and yet peacefully on Thursday, Oct 28th in her home, surrounded by her loving husband and family. A devoted mother, grandmother and a great grandmother.

She was preceded in death by 5 of her 14 children, Baby Benjamin and her twin sons Peter and Paul. And another set of twins that were still born. And most recently, by her beloved grandson Emery Iese.

She will be sorely missed by all those who knew her. A loving and kind soul, who thoroughly enjoys her family, loves to laugh and spread her joy with others.

She had suffered some long standing physical ailments and debilitating illness with Diabetes, End Staged Kidney Disease with Dialysis, and Parkinson's Disease. Although, she was finally called to rest, and did so comfortably and peacefully in the arms of our Heavenly Father.

Vitolia (Victoria) lived her life with the examples of her favorite Bible verse-Ephesians 4:32-

"And be KIND and COMPASSIONATE to one another, forgiving one another, just as GOD has also forgave you in Christ!"