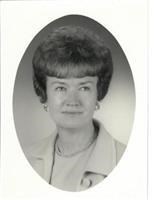 Viva May was born to Reed and Maggie Frandsen Gammell on El Cinco de Mayo, May 5, 1922, in Colonia Juárez, Chihuahua, México, where her parents were teaching school at the Juárez Academy. As excited shouts of "¡Viva! ¡Viva! ¡Viva el mayo!" rang through the town; a beautiful red-haired baby girl entered the world. As her father raised his first child to the window for the students and faculty to see, Reed and Maggie aptly named her, Viva May. One year later, Viva May's pram was adorned in festive decor, and she reigned as "Queen" of the May Day festivities.

After returning to the United States, Reed and Maggie made Ogden, Utah their home. Viva May's parents were exceptionally trained and gifted musicians and teachers. Music was an integral part of Viva May's upbringing. She was a superb pianist, organist, and violinist, winning numerous awards and honors for her remarkable talents.

Viva May graduated from Ogden High School in 1940. In addition to many school activities, she was editor of a weekly column for the Standard and played violin in the school orchestra.

Viva May received an associate degree from Weber College where she served as president of LaDianaeda Sorority and was voted Orchid Queen her sophomore year.

She attended Utah State University, was active in Chi Omega Sorority, and graduated with a Bachelors Degree in Education. She was a teacher at Quincy School.

On July 17, 1945, Viva May married her eternal sweetheart, Keith W. Wilcox, in the Logan Temple. Keith was an Ensign, Chief Naval Engineer, and Chaplain in the US Navy. As WWII came to an end, Keith and Viva May made their home in Provo, Utah, where Keith worked as an engineer; however, architecture proved to be his true passion. Keith, Viva May and their young family moved to Eugene, Oregon where Keith earned his Master of Architecture Degree from the University of Oregon.

In 1954, the growing family planted roots in Ogden, Utah where Keith established his architecture practice, Keith W Wilcox and Associates, and Keith and Viva May built their iconic home, which 58 yrs later was featured in the Weber County Heritage Home Show. Viva May played a vital role in raising their six daughters and supporting Keith's increasing work and ecclesiastical responsibilities. She loved to entertain and hosted endless friends, clients, and dignitaries. She also hosted many Church General Authorities and Presidents who stayed in their home during weekend conferences when Keith served as president of the Weber Heights Stake from 1958-1973. Viva May's cooking and entertaining skills were 2nd to none, and always did her beautiful dinners end with music.

Viva May was active in many civic and service organizations including Charaya, Child Culture Club, Daughters of the Utah Pioneers, and numerous children and alumni groups. Viva May established the Maggie Gammell Music Scholarship at Weber State University, and was elected Weber County Mother of the Year in 1991; an honor followed by election as 1st runner up as Utah State Mother of the Year.

Viva May won multiple gold medals in swimming at the Huntsman Senior Olympic Games. She had a life-long zest for learning and loved traveling to all parts of the world. She was an avid gardener and enjoyed canning and preserving her own harvest.

Viva May was a dedicated member of the Church of Jesus Christ of Latter-day Saints. She served as stake organist for 15 years and numerous other callings too extensive to list. She loved people and loved serving wherever needed. More importantly, Viva May followed her innate instinct to help anyone who needed a kind heart, a listening ear, or a loaf of her homemade bread.

Viva May was blessed to serve with her husband in many church callings. In 1974, she and Keith were called to preside over the Indiana Indianapolis Mission in Carmel, Indiana. Her endless meals, love, and compassion for the Indiana missionaries were legendary. In 1980, Keith and Viva May were called to serve as President and Matron of the Ogden Temple, and in 1984, Keith was called into the 1st Quorum of the Seventy, with an assignment in the Far East. While living in Tokyo, Japan, Keith served in an Area Presidency and Viva May served as an Area General Board Representative over the entire Primary, Young Women and Relief Society in the Far East area.

Following Keith's release to Emeritus General Authority, Viva May and Keith served a mission as directors of the Los Angeles Temple Visitors Center. Viva May later was called as Relief Society President of the Kingston Ward at age 77. Keith and Viva May were supporters of and donors to the McKay-Dee Foundation, Weber State University, and many other worthy causes. Viva May and Keith were honored as Alumni Homecoming Royalty at Weber State University, and on October 13, 2005, Ogden City was proclaimed "Keith and Viva May Wilcox Day."

Keith and Viva May's lifelong service together was remarkable. They loved and supported each other unconditionally. They were a team, always. The mantra they lived by was simple: "Don't look away from the world, give yourself to it."

A family graveside service will be held on Wednesday, July 8, 2020. We respectfully ask those who attend to observe the recommended local precautions for COVID-19.

The family wishes to thank the following for their devotion and compassionate care: Nelson L. Astle, MD, John R. Starley, DDS, all family members who attended to Viva May's needs, the entire staff at Legacy House of Ogden, and Bristol Hospice; all were angels ministering to one of God's most precious angels, Viva May Gammell Wilcox.
Published by Lindquist Mortuary - Ogden from Jul. 4 to Jul. 5, 2020.
MEMORIAL EVENTS
Jul
8
Graveside service
Funeral services provided by:
Lindquist Mortuary - Ogden
GUEST BOOK
3 Entries
May your hearts soon be filled with wonderful memories of joyful times together as you celebrate a life well lived. I had the privilege of serving under President and Sister Wilcox in the Indianapolis Indiana mission. I remember especially the mini Sister Conferences that Sister Wilcox put together for all the sister missionaries. We were blessed to have Sister Wilcox share her wisdom and teach us about service as a missionary. I always left those meetings with a stronger testimony and renewed spirit. I will always be grateful for the opportunity I had to serve under her guiding influence.
Brenda Cook Nielsen
Acquaintance
July 10, 2020
It was a great pleasure & joy to have met Viva May & her family. I absolutely loved talking to her about her life stories. I have learned so much from Viva May about Keith & her, I will never forget it! She was so sweet & happy all the time. Thank you so much for letting me take care of your mom. I will definitely cherish her gifts and recipes for ever. I will never forget her b-day. This yr i asked Viva,,how old are you 25 she said 21 & we laughed. She said I'm just ready to be with Keith and my lord. I'm am so thankful to have met someone like Viva May, she changed my outlook on life. Thank you again, I will never forget Viva May!
Kristina Garcia
July 6, 2020
I am part of the WT 13th Ward Relief Society at Legacy House. It was my privilege to get to know your sweet mom. She always had a smile and was constantly looking for ways to bring joy into someone else's life. She was an example of love and compassion and touched my life. There are so many more things I could say about her, I loved her and her sweet spirit. Heaven has gained a true daughter of God.
Venna Warlaumont
July 6, 2020