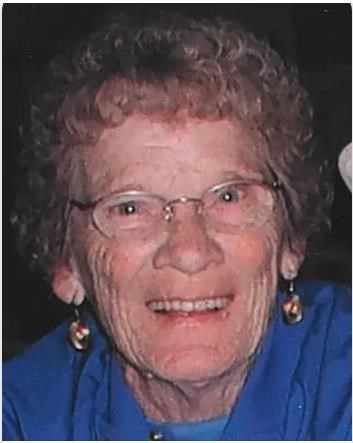 Wilda is the daughter of Bernard Eagen and Lela Juanita Mitten, born in Adair, Missouri on February 13, 1932.

Wilda was employed at Champion Spark Plug for 30 years as an inspector while helping her husband Earl take care of their hobby farm east of Sperry, Iowa.

Retiring in 1991, Earl and Wilda traveled in their motorhome, going wherever they felt the urge. After traveling for several years, they purchased their Apache Junction home in 1997.

Wilda loved to read, put together puzzles and play shuffleboard with her friends at the VFW and Eagles Club in Apache Junction.

She is also survived by three great-grandchildren: Ava McCulloch, Aydren McCulloch, Kaitlyn Runyon, as well as one sister, Carmelita McVay of Kirksville, MO.

Wilda is preceded in death by her parents, her husband Earl, as well as her sisters: Agatha Collene Howard, Lucille Nixon, and Wilma Hanes, and her brothers: Robert Eagen, Harold Eagen, Gerald Eagen, Leon Eagen, and one infant brother.

Wilda was also preceded in death by a very special grandson, Craig Lewis.