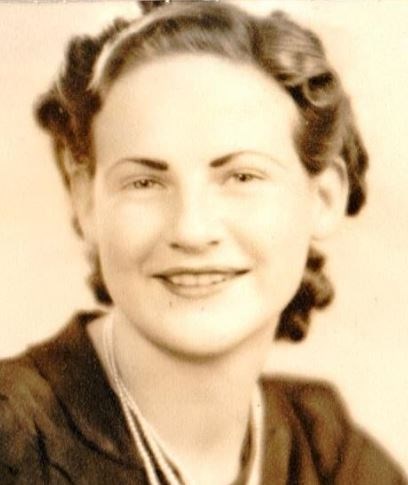 Betty Vassos, age 97, died at The Chateau in Gardnerville, Nevada from the coronavirus on December 21, 2020.

Betty was born in Westwood, California. The second daughter of Cecil Henry Aldridge and Edna Elizabeth Sackfield. Most of her childhood was spent in Fort Bidwell, California with her sisters, Dorothy and Emma Jean, her best friends then and forever.

Betty's father built and operated the first power plant in New Pine Creek, California. Her mother was a homemaker. Betty, Dorothy and Emma Jean had the run of New Pine Creek during their childhood. After Betty's mother died from multiple sclerosis in 1942, Betty moved to Benicia, California to live with her sister Dorothy and brother-in-law, which proved to be very fortuitous when she met Manuel Vassos at a dance. They were married in 1943. While Manuel was at sea with the merchant marines during WWII, their daughter Elizabeth was born, and four years later, a son, Nicholas David completed the Vassos family.

Benicia was Betty's home for more than 64 years. Manuel passed away in 2006, and Betty moved to Napa, California to be closer to her son. In 2010 she was much sought after, her daughter and son vying for her to move in with them. It was finally decided to share Mom; she spent part of the year with her daughter and the other part of the year with her son, a mother truly loved. After her son's untimely death in January of this year, she moved to Genoa, Nevada to be with her daughter. Her move to The Chateau was in November of this year.

Besides helping with the war effort at the Richmond Naval Shipyard during WWII, Betty spent many years working in the Tot Shop in Benicia, a children's store owned by members of the family. She could give you the family history of the entire town of Benicia. Betty touched the lives of all who met her with her cheerful, positive outlook. She was kind, generous and a great listener who always had time for her family and friends. She was a voracious reader, loved to garden and was always ready to talk politics with anyone who would listen.

Services will be held at a later date due to the coronavirus. In lieu of flowers, please donate to your favorite charity in Betty's name.

To plant trees in memory, please visit our Sympathy Store.
Published by Napa Valley Register on Dec. 31, 2020.
MEMORIAL EVENTS
No memorial events are currently scheduled.
To offer your sympathy during this difficult time, you can now have memorial trees planted in a National Forest in memory of your loved one.
GUEST BOOK
3 Entries
Betty was always happy to see the kids of the kids of the parents she knew. She outfitted me with St. Dominic's uniforms, then my children's baby clothes..I loved the Tot Shop, a huge part of Benicia's
history and a cherished memory..
Nancy Lewis
Friend
January 5, 2021
Aunt Betty was a loving, caring beautiful lady. So much fun to be around. Loved beyond words and missed beyond measure, tell Mom and Aunt Dorthy we miss them.
Vicky Reeve Scholle
January 1, 2021
Alex Im so sorry for your loss though it sounds like your Grandmother had a great life.
Marie velez
December 31, 2020