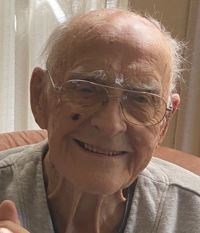 Don Long passed away peacefully on August 16, 2021 in his home in Napa. He was born on June 22, 1921, the eldest son of Anna and Bert Long, in St. Cloud, Minnesota, and was preceded in death by his brothers Jack, Ken and Dick, his sisters Joan and Gladys and his wife of 64 years, Madeline Long. Don was 100 years old, a member of the "greatest generation," and enjoyed many events celebrating WWII veterans during the last decade of his life.

After graduating from Barnum High School he hitchhiked to California to find work, and when he couldn't joined the Navy in March, 1941. On Dec 7 he was sitting in a seaplane on Kaneohe Bay (across the island from Pearl Harbor) when it was strafed and caught fire, for which he was later awarded the Purple Heart.

Don met his wife, Madeline Anderson, at a rollerskating rink in Oakland, CA when he was at radio school in Alameda. They married in October, 1943 at the Navy chapel in Pensacola, Florida when Don was in flight training. He got his wings on Christmas Eve, 1943.

He flew the Atlantic Barrier Flights between Argentia, Newfoundland, Iceland and the Azores in the early sixties, part of the Early Warning System. He retired as Commander in 1962, taught woodworking at El Cajon High School, and in the mid seventies used his piloting and naval skills to captain private boats fishing in Cabo San Lucas, Mexico, sailing or flying clients down from Coronado where he and Madeline retired. They moved to Napa in 1991 to be closer to their grandsons.

Don loved camping and enjoyed taking the boys on summer camping road trips back to Minnesota, teaching them to fish, light fires with flint and swim in lakes. He amazed family and friends by continuing those trips on his own as recently as 2017 when he was 96, and mastering the technology for keeping in touch on his cell phone. Though finally unable to travel so far, he often took local drives to enjoy the scenery and wildlife around the Napa Valley. He was a skilled woodworker, and played the guitar, ukulele and accordion.

He was cared for in his home by his grandson, Ben. Though not able to play as actively with his great grandsons, he always enjoyed having their noisy happiness nearby. He had many visitors, both old friends and new ones from his recent role as a celebrated Pearl Harbor veteran, as well as caregivers who enjoyed his conversations and interest in their lives.

The family would like to thank Collabria for the compassionate and practical care provided this past year.

A military honors and memorial service is planned on September 25 at the Napa Yacht Club Common Area. In lieu of flowers, Don would like donations to go to Collabria Care Hospice at 414 South Jefferson St. in Napa.

Due to COVID, those attending the memorial are asked to wear masks and practice social distancing during the service & reception.

Published by Napa Valley Register on Sep. 8, 2021.
To plant trees in memory, please visit the Sympathy Store.
MEMORIAL EVENTS
Sep
25
Memorial service
Napa Yacht Club - Common Area
CA
MAKE A DONATION
MEMORIES & CONDOLENCES
3 Entries
Our deepest condolences to the Long family. We had the pleasure of meeting Don on several occasions on his camping trips to Rudge Lake, Ontario. The Kiiskila Family
Pia Kiiskila
October 14, 2021
Don visited our gliderport a few years back and made a lasting impression. We were saddened to learn of his passing and will remember his enthusiasm and zest for life. He was the type of person we always made time for and the pilots loved to visit with him.
Williams Soaring Center - Mayes Family
Other
September 11, 2021
To the family of Don Long, we extend our condolences. Don was such an active member of SDPHS Ch 5 Walnut Creek. We so enjoyed his stories. He will be missed. Fair Winds and Following Seas CMDR Donald B Long. Rest in Peace, Sir.
Sons and Daughters of Pearl Harbor Survivors
Other
September 10, 2021
Showing 1 - 3 of 3 results