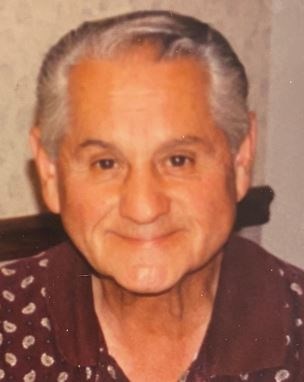 Frank Joseph Burrell, Sr. was born September 15, 1928 in Texas to William and Jovita Burrell. He moved with his family to Napa in 1929. He attended local schools throughout his childhood, graduating from Napa High in 1947. Frank enjoyed his time on the track & field team, and the varsity football team. His love of Napa sports teams continued throughout his life, attending both Napa and Vintage High Schools' sporting events for over 40 years, and playing in the Napa City Softball League for many years.

Frank married his high school sweetheart, Joan Cardwell, on August 7, 1948 in Reno, Nevada. They welcomed two children before he enlisted with and was called up by the United States Marine Corps, where he fought in the Korean War from 1950-52. Their third child was born in October 1952. While studying on the GI Bill, he received his A.A. from Napa Junior College.

Frank began his career in the steel industry in 1952 as a welder. During his tenure at Kaiser Steel, he was the President of the Kaiser Steel Management Club, President of the Kaiser Steel Golf Club, and was a 25-year member of the Kaiser Steel Recreation Committee. Frank and his wife lived in Ahwaz, Iran from May 1976 to December 1977 while Frank oversaw the assembly of a new pipe mill for the Shah of Iran. He felt pride in the part he played in Kaiser Steel Mills' construction of the Bay Area Rapid Transit (BART), the Washington, D.C. Rapid Transit systems, and many other projects great and small. He retired in 1994 after 42 years in the industry as a Pipe Mill Superintendent with Kaiser/Oregon Steel Mills. Frank proudly shared that he was never late to work in his entire career.

During his retirement years he and his wife traveled the world over, enjoying many cruises and many rounds of golf. Some of the highlights of their travels were golfing at St. Andrew's in Scotland, attending the British Open in Ayr, Scotland and the Ryder Cup in Marbella, Spain (where Tiger Woods played in his first Ryder Cup tournament). He especially loved touring the U.S. historical sites, including Boston, New York City, Washington, D.C. and New Orleans, as well as National Parks. His love of cruises was only matched by his love for his wife. He kept a list of his favorite swing dance tunes in his wallet to give to the ship's bands to play, so he and Joan could dance the night away under the ocean sky.

Two of Frank's great personal milestones were celebrating his 90th birthday and 70 years of marriage. In fact, he exceeded his own expectations, living 92-years and enjoying 72-years of wedded bliss, nearly all in the Napa Valley.

Frank died peacefully at home on Monday, October 19, 2020. He was preceded in death by his father, William, his mother, Jovita, his sister, Winifred, and his brother, William. Frank is survived by his wife, Joan, and his brother, Robert (Rose); his son, Frank J. Burrell, Jr. (Janet), and their children Michele (Brett), Michael (Nataliya), John, Elizabeth (Greg), and Ryan (Monica); his daughter, Claudia Montalbano (Gary), and their children Camille (Benjamin), Megan (Luciano), and Carly; and his daughter, Nora Paoli (Greg), and their children Jen, Vincent, and Melissa. He also leaves behind his seven great-grandchildren: Aaron, Landon, Jasmine, Maxwell, Wyatt, Charlotte and Finn; and numerous nieces and nephews. Frank was liked by all who knew him and adored by those who knew him best. Language cannot express how profoundly he will be missed. He will forever be remembered as a 'helluva nice guy'.

In lieu of flowers donations can be made in Frank's name to the Napa Boys and Girls Club, the Napa High Alumni Association, or a charity of your choice. A celebration of Frank's life will be held on Friday, October 30, 2020, at 10:00 AM at the Tulocay Chapel, 411 Coombsville Rd, Napa, CA. COVID-19 precautions (facemask and social distancing) will be in effect.

To plant trees in memory, please visit our Sympathy Store.
Published by Napa Valley Register on Oct. 27, 2020.
MEMORIAL EVENTS
Oct
30
Celebration of Life
10:00a.m.
Tulocay Cemetery, Crematory & Mortuary
411 Coombsville Rd, Napa, CA 94559
Funeral services provided by:
Tulocay Cemetery, Crematory & Mortuary
GUEST BOOK
7 Entries
Thinking of you in this time of change and loss. Best wishes.
Jane elmore
October 30, 2020
Joan, Thinking of you and the Family in this time of sorrow. Soon, you will be with Him in Eternity. With love!
Skippi Memmott
October 30, 2020
Our sympathy to the Burrell family. My father Tom and Frank went to Napa High together and he was at my parents wedding in 1953. My father and all the people at the Sheriffs office will miss him.
Tom Johnson
October 29, 2020
Sorry to learn of Franks Passing. My father Tom Gomez( deceased) worked with Frank for 35 years at Kaiser Steel and Napa Pipe and always spoke very highly of his friend . I remember Frank as being a very classy man. Peace to you all
Doug Gomez
October 28, 2020
What a wonderful life! Joan and Frank are good people.
Mardel
October 28, 2020
Hi Joe, I read in the Register online that your dad passed away. May I offer my condolences to you and your family. Losing a parent is never easy. I hope the memories you have of him will comfort you during this time.
Judy Williams Flynn
October 27, 2020
Sympathy to Burrel Family They're a very important part of my life have been for 50 years!!!!
Linda Snyder
October 27, 2020