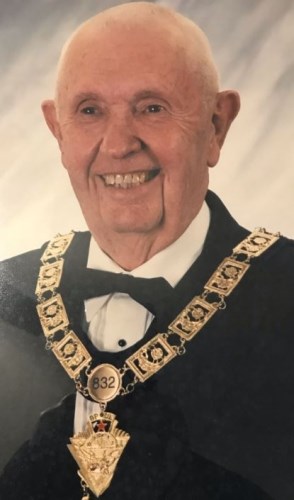 George William Langdon known as "Bus" was just shy of his 99th birthday when he passed peacefully, per his wishes, at his family home on November 5, 2020. Many of his friends and family showed love and provided comfort for him in his final days.

Bus was born to George and Louise Langdon on December 10, 1921 on a farm in Suisun Valley. As a young boy his father called him "Buster" and "Bus" has stuck with him his entire life. Bus attended local schools as well as Santa Rosa JC where he enjoyed playing for the football team.

In 1942 he met and married Gladys Switzer. They had one child and enjoyed 59 years together before her passing in 2002. In his later years, after a Napa High School Reunion, he renewed his acquaintance with Maxine Adamson. Since then they have enjoyed many years spending time together.

In 1942 Bus enlisted in the U.S. Navy. His first assignment was a gunner's mate on the Heavy Cruiser the USS San Francisco. In early 1945, he transferred to the Destroyer USS Stormes. The ship was doing picket duty around Okinawa when it took a Kamikaze hit which killed 23 sailors. He survived that day, however, it was a day he would never forget. Bus was assigned along with several other sailors to retrieve the bodies after the attack. He was honorably discharged after the war ended in 1945 as a Gunner's Mate Third Class USNR. Forever a Tin Can Sailor and World War II Veteran.

After his years of service he operated "Langdon Jewelers" watch and clock repairing in downtown Napa and was a watchmaker for 50 + years, eventually operating out of his home by word of mouth and was busier than when he had his shop. For several years, he took over the operations of the Plaza Bar downtown in his uncle's absence.

Bus was an Honorary Life Member of the Benevolent and Protective Order of Elks, Napa Lodge #832. He spent many years actively involved and served as Exalted Ruler, Secretary, PER Association President and the California-Hawaii Elks District and Lodge Chairman for the Elks National Veterans Service Committee for over 30 years. Despite his advanced age, he still made weekly visits to the Veterans Home of California in Yountville to see that their needs were met. Helping veterans was his passion. He developed the "Wall of Honor" project at the Napa Elks Lodge which displays living and deceased service veterans. The project is dedicated to honoring those members who served to protect their country. Elk members and visitors to the Lodge can view and pay tribute to those that served. One of his proudest moments was receiving a personalized letter and Certificate of Honor from President Obama for his years of service to the Veterans.

Up until August of this year Bus drove to the Lodge every day to check into his office and have his 2 vitamin C drinks with his friends. He was also a member of the Native Sons of Napa.

Bus is survived by his five grandchildren, Ross McKee (Deborah), Ruthann McKee, James McKee, Timothy McKee and Katy Swaney (Brian), many great grandchildren and great great grandchildren. He was predeceased in death by his parents George and Louise, sister Luella, wife Gladys, daughter Beth and many Cocker spaniels named Rusty and Red which he raised throughout the years. He leaves behind his lady friend Maxine Adamson, as well as many great friends of the Elks and the community. He will be greatly missed by all who knew him. Thank you to those who helped Bus remain in his home for his final days, Stephanie, Alejandra, Mareli, as well as Senior Helpers and Collabria Hospice Care.

Bus will be laid to rest on November 11, 2020, Veterans Day, at Tulocay Cemetery next to his late wife. All friends are welcome to attend a graveside service promptly at 11:00 a.m. Social distancing and masks are required. In lieu of flowers, you may make a donation to Elks National Foundation in his honor through the Napa Elks Lodge or do something to honor a veteran. Bus has always exemplified the Elks slogan "As long as there are veterans the Elks will never forget them. " A celebration of his life will be held at a later date that allows a party for which he would be proud to have hosted himself.

To plant trees in memory, please visit our Sympathy Store.
Published by Napa Valley Register on Nov. 10, 2020.
MEMORIAL EVENTS
Nov
11
Graveside service
11:00a.m.
Tulocay Cemetery
GUEST BOOK
3 Entries
So honored to have met Bus for the first time 6 years ago. I know he had a special friendship with my Grandmother Marge who just passed this year. I always thought of Bus when I passed by the USS San Francisco Memorial at Lands End GGNRA. Fair winds and following seas in Heaven Old Sailor....
Patrick Smith
November 14, 2020
What a guy! I met Bus fifteen years ago when he and his great smile showed up out of the blue at my mom's interment (my mom's mother and Bus' mother were sisters), but I never forgot him. Who could?
Paul Smith
November 11, 2020
Bus was one of the most generous men I have ever known. He always thought of others first and gave of his time and talents. His celebrations at the Elks Lodge are my fondest Napa memories. As part of his large extended family he always made me feel welcome, as a veteran, he appreciated my service. He made our country better. He will be missed.
Annalea Collins
November 11, 2020