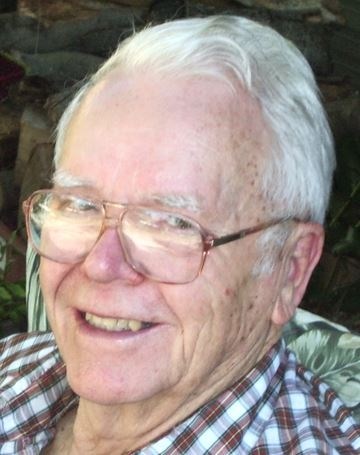 Gerald "Jerry" Herbert Davis, beloved husband, father, grandfather, great-grandfather and friend, passed away on August 7, 2021, at his residence in Napa, California. He was 98 years old, a member of the "greatest generation," a proud Navy veteran of World War II. Jerry was born on May 30, 1923 in Maywood, CA, the eldest son of Elmer and Margaret Davis. He had one brother, Elmer, and two sisters, Joan and Carolyn. He was preceded in death by his parents, brother, sister Joan, and son Edward.

Jerry's family moved several times when he was quite young, living in Tulare, CA for several years. They finally settled in Maywood, CA when he was 7 years old. During summers his parents rented a cabin on the Long Beach lagoon, where Jerry learned to swim. He attended Huntington Park High School, and in ninth grade met his lifelong friend Norm Conradson. They remained close friends for 85 years.

Jerry enlisted in the U.S. Navy on December 12, 1941, five days after the attack on Pearl Harbor, and served in the Pacific Theatre, first on the heavy cruiser U.S.S. Minneapolis and then the escort carrier U.S.S. Saginaw Bay. He was on the Minneapolis when it survived being hit by two enemy torpedoes during the Battle of Tassafaronga near Guadalcanal in November 1942. After temporary repairs, he was part of the skeleton crew that took the "Minnie" across the South Pacific back to Pearl Harbor, and then to Mare Island, California. Jerry was subsequently assigned to the Saginaw Bay as a gunner's mate third class. He participated in 16 major battles, including Luzon, Leyte, Iwo Jima and Okinawa, and received 13 battle stars. He was honorably discharged on November 4, 1945.

After returning home to Southern California Jerry started college at the University of California Los Angeles. It was there he met Antonia "Toni" Farkas, introduced by their mutual friends Norm and Norm's then-girlfriend (later wife) Diane. They married in 1947 and celebrated their 65th wedding anniversary 11 weeks before Toni's passing.

Jerry and his family lived in Camarillo and then Saticoy, CA for more than 40 years. He was active in his parish, Sacred Heart Roman Catholic Church in Saticoy. (He was baptized a Catholic aboard ship during World War II.) In the 1990s they moved to Watsonville and later to Napa to be closer to their daughter Marie.

Jerry first worked as a printer on his high school newspaper, and after graduating worked for a printing company in Los Angeles. He was a typesetter for the Camarillo (CA) News and then for the Ventura County Star-Free Press for the rest of his career. He served in several positions with the International Typographical Union's local in Ventura. He was a "union man" and registered Democrat his entire adult life. During his working years he made several trips to the Union's headquarters in Colorado Springs, CO, to take courses in the latest newspaper printing technology. (Ironically, after retirement he refused to have anything to do with computers!)

Jerry enjoyed trips with his family to several of the national parks in California, including Big Basin, Kings Canyon and Yosemite. He often rented a cabin on the California coast north of Ventura for one-week family summer vacations. He and Toni also traveled to Budapest, Hungary, where Toni was born and lived as a child. Jerry loved the beach and enjoyed bodysurfing. In later years, he helped Toni with her gardening, and they enjoyed taking walks in their Napa neighborhood. Jerry was a lifelong L.A. Dodgers and Rams fan – until he and Toni moved to Napa, when he enthusiastically switched his allegiance to the San Francisco Giants and 49ers.

A memorial service and reception will take place on September 25, 2021, at the home of his daughter Marie Wights.

Donations in lieu of flowers can be made in Jerry's name to St. Apollinaris Roman Catholic Church, Napa, CA.

Published by Napa Valley Register on Aug. 23, 2021.
To plant trees in memory, please visit the Sympathy Store.
MEMORIAL EVENTS
Sep
25
Memorial service
home of his daughter Marie Wights
CA
MAKE A DONATION
MEMORIES & CONDOLENCES
1 Entry
Marie I´m sorry to hear of the passing of your father I´ll keep you him & your family in my prayers
Margarita Rodriguez
August 23, 2021
Showing 1 - 1 of 1 results