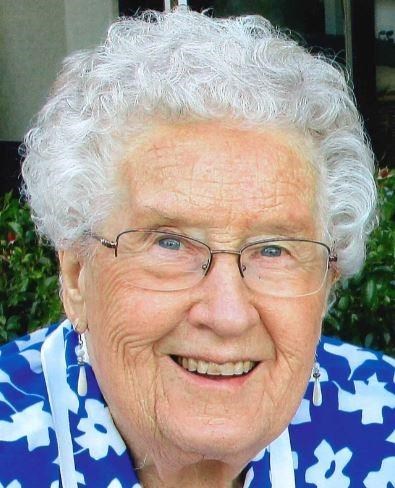 On June 19, 2021, Helen Ruygt passed away peacefully in her sleep at the age of 93. As the matriarch of the Ruygt & Van Winden Families she was a kind and caring soul, loved by many family and friends locally and in her homeland of Holland. She was born Helena Adriana Maria van Winden in Pijnacker, The Netherlands on February 25, 1928. She was the eldest of 7 children (1 deceased in infancy and another deceased at the age of 15 months). She was the daughter of Jacobus "Jake" and Maria van Winden (de Koning). Helen's mother passed away when she was 14 years old, so it fell upon her to help with the household and her younger siblings at an early age. She also helped clean at her church, part of her growing devotion to her Catholic faith and helped an aunt weekly for spending cash. She learned to knit and made her first sweater at the age of 10, a skill she practiced her whole life. She first met her husband Louis G. Ruygt at the age of 15 along the "Molenpad" (Windmill path) while on a bike ride with her close group of friends but it was not until the age of 18 that she was allowed on their first date. Helen endured the hardships of 5 years of Nazi occupation during World War II and her family sometimes provided others with shelter or food from their farm. Helen and Louis married Oct 29, 1949, 6 days before her father, stepmother and siblings emigrated to the United States. The newlyweds were able to live in the family home in which she was born, and there they brought 5 children into the world in the next 6 years. Louis worked as a banker in The Hague but after the devastation of WWII, Louis did not see much promise in remaining in Holland and applied for immigration to the USA. In 1956 he was able to board his family on a 2-day airplane trip to California. Helen's family was already settled in Napa, so they joined the family and Louis began working at his father-in-law's nursery Van Winden's Pueblo Garden Center. A 6th child was born to them 2 years later and a 7th perished near birth.

Helen was an impeccable housekeeper and always kept her children well dressed, often receiving complements for her ability to keep up with the needs of a large family. She was an excellent cook and seamstress, sewing numerous dresses and sweaters as well as making alterations to the dresses of her future daughters-in law and bridesmaid. She helped tend to the garden where they grew fruits, vegetables and a flower garden that was admired by many. When Louis began to establish his own garden maintenance business, she often joined him after dinner to bring in additional income. It was because of her frugality and penny-saving that Helen and Louis were able to visit relatives in Holland periodically and go on many road trips to visit their daughter's family in Louisiana, Florida and Alabama and to their son in Arizona. Helen and Louis were so proud and felt especially blessed to have a son (Hans) who was ordained a Roman Catholic priest (April 1985) and visited him at the parishes he administered and served in California and Arizona. Helen remained in contact with many friends she made at each parish.

Helen had a strong love for nature and its boundless beauty. They traveled across the country several times sightseeing and frequently visited Lake Tahoe, Yosemite and the Sonoma Coast. From all these adventures she collected treasured memories in over 130 photo albums allowing her to revisit her travels in later years. She never forgot if someone else took a picture she wanted to add to her collection. She never forgot a birthday or anniversary although she had 100's of dates in her head. Helen was an avid letter writer and kept in contact with numerous relatives until she was no longer able to write. Always thoughtful and caring, she treasured the many letters and cards she garnered in response to her letters. Helen was a devoted Catholic, praying the rosary daily and attending Mass as often as she was able to, celebrating at home with her son Fr. Hans when he visited her. She was a long time member of the YLI (Young Ladies Institute) and the Women's Guild at Saint John the Baptist Parish and Saint Apollinaris Parish. She was awarded Woman of the Year. She also regularly visited the elderly as a member of the John Bosco Society at Saint John's Parish and was involved as a volunteer at St. John's School, while her children attended. Helen is survived by her brother Peter (Johanna) Van Winden and sisters Jean Coyle and Tina Lloyd (Jim). She is also survived by her children Marian Van Voast (Zachary), Jake Ruygt (April), Fr. Hans Ruygt, Helma Haines (Scott), Louis A. Ruygt (Elizabeth), and Fr. David Ostler who she treated like a son. She is survived by nine grandchildren: Lainie, Wendy, Kimberley, Jennifer, Jessica, Andrea, Melissa, Megan and William as well as two great-grandchildren: Brandon and Cameron. She also leaves many friends at The Springs of Napa.

She was predeceased by her husband Louis G. Ruygt (2016), parents Jacobus "Jake" and Maria, her stepmother Wilhelmina Van Winden, her brother Adrian Van Winden, her daughter Lenny Ruygt and her grandson Jeffrey Warrington. She is also survived by numerous cousins, nieces and nephews in California, Canada and The Netherlands.

Condolences and memories can be shared on: claffeyandrota.com.