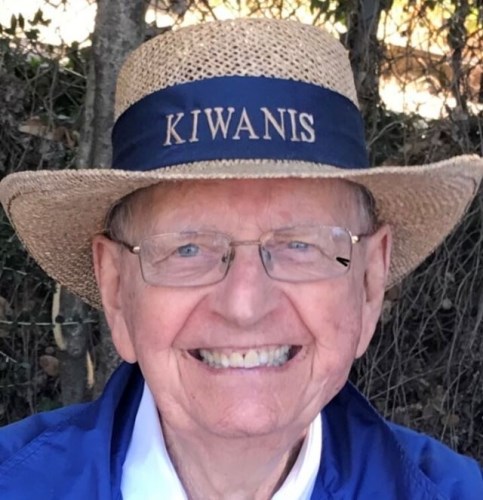 Jim loved his family and friends, he loved Napa and he loved children.

Jim was born just before the Great Depression, and spent his earliest years shuttled between relatives in Arizona and central California. He eventually settled with his father in Oakland, where they lived behind a pool hall and barbershop. Life was tough, but Jim scraped by with newspaper routes and successful fishing at Lake Merritt.

Jim couldn't wait to join the Word War II effort following his early, high school graduation. He spent his enlistment with the occupational forces in Japan. Upon his return, he married his high school sweetheart, Dorothy. They started their family in the East Bay, where two young sons, Steve and Doug, were born. They seized an opportunity to own a small, variety store in St. Helena in 1953. Their young family grew, with the birth of Betsy, then Paul. Jim and Dorothy enjoyed a 73 year marriage of romance, friendship and partnership.

Jim and Dorothy took a chance on an opportunity to open a larger, and potentially more lucrative store in 1959 and launched Roberts Bel Aire Variety in Napa. Their business thrived and eventually evolved into Roberts Hallmark & Gifts. They took great pride in receiving spontaneous compliments over the years from former patrons of their business.

Jim's dedication to helping children started when he was the Boy Scout Master in St. Helena, before his sons were old enough for Cub Scouts. He was also actively involved with the Knights of Columbus and the St. Vincent de Paul Society. During his retail career, he discovered the joy of active participation in an impactful service club, Kiwanis. Jim also was dedicated to the Napa Library, where he served on the Board for many years, and several other charities. After Jim and Dorothy sold their business in 1994, Jim focused his retirement on his charitable activities.

We hope that Jim will be remembered for his leadership and support of the marvelous efforts of the Kiwanis Club of Napa to enrich the lives of youth. He was especially proud of the 75 playgrounds they built in the Napa Valley. He loved working shoulder to shoulder with his fellow Kiwanians, as they devoted their weekends to constructing places for kids to be kids, safely.

Jim was a wonderful husband, father, friend and community leader. He was fortunate to have received many accolades during his long career of service. The ultimate honor for Jim was the dedication of the wonderful playground in Fuller Park to him in 2017. He was also proud of the recognition he received from Kiwanis International.

A private, family service was held for Jim, with respect for Covid 19 precautions. We hope to organize a more appropriate celebration when circumstances permit.

If you wish to make a donation in Jim's memory, his family suggests Collabria Care, the Queen of the Valley Hospital Foundation or the Kiwanis Club of Napa.

To plant trees in memory, please visit our Sympathy Store.
Published by Napa Valley Register on Nov. 20, 2020.
MEMORIAL EVENTS
No memorial events are currently scheduled.
To offer your sympathy during this difficult time, you can now have memorial trees planted in a National Forest in memory of your loved one.
GUEST BOOK
14 Entries
Jim Roberts was the epitome of someone who truly loved Napa and the people of it. I had the pleasure of working with him on different projects over the years and he had more stamina and heart than anyone I know when it came to accomplishing something for this community. His face always had a smile, his speech always uplifting. He was a true example of love and friendship! My deepest sympathy to his family and a word of gratitude for sharing him with all of us! God Bless, Janelle
Janelle Brown
November 23, 2020
We are so sorry for your loss. James was a great man in Napa with his lifetime of community involvement, especially with Kiwanis and at Shearer School.
Steve & Ana LaVoy
November 22, 2020
My deepest sympathy to all who knew and loved James. I probably met him in his store because it was my all time favorite place to shop in Napa. Best quality and best customer service....we need more stores like Roberts Bel Aire Variety. Thank you.
Roxanne Ridgway
November 22, 2020
There are some people we wish could live forever. Mr. Jim Roberts was one of them. Such a kind man and a true gentleman. My sincere sympathy to the family. Diane Pearce
Diane Ellis Pearce
November 22, 2020
I am in Kiwanis and will miss Jim Robert´s very much. I recently saw Jim having lunch at Vinters golf course in Yountville. He was having lunch with some young people and I thought maybe in looked like a small committee maybe. He looked great, it was before his surgery. I´m glad I was able to say hello and chat a bit. He will be missed.
Sally Craig
November 21, 2020
What an honor it is to have known such a kind, caring, and generous person. Jim´s legacy will live on in all the amazing playgrounds he built and in the fine example he always set for the rest of us. My condolences to your family.
Lisa Miri Blampied
November 20, 2020
Once in awhile we have the honor to know a great man. Jim Roberts was the epitome of greatness. His courtesy, honesty, friendliness, generosity, hard work, service to the community, and down right goodness are unmatched. His smile was legendary and endearing. I say to all, "Bow your heads, a great man has passed before you."
Daniel Monez
November 20, 2020
Such a wonderful human being! He will be missed but Heaven just got a great person!
Cristina Hangman
November 20, 2020
May you hold all the great memories close to your hearts! Jim was my dads (Dario) friend and I hope they are enjoying a cup of coffee in heaven! They will of course joke about which group was better: Kiwanis vs. Rotary Of course it was my favorite store and I still have items purchased there The last thing I bought were small silver containers for my dads ashes Jim was a great kind man!
Debbie Bardini Gobel
November 20, 2020
Jim was a wonderful friend to all, especially Napa Valley Special Olympics. Always ready to help in any way. He will be dearly missed, and thought of often with a smile. Love to his family.
Suzy Jordan
November 20, 2020
There is no man I looked up to with more love in my heart than Jim Roberts for his business creed, his zest for life and helping his fellow man. . Just a wonderful human being on ALL levels of life. His marriage remained "16 and in love to his wife from day one". Where ever Jim is going I want to join him. Thinking he´s in the front row in heaven. God bless him his family and all the lucky people who got a chance to be touched by his goodness. Which were many. RIP as my Dad said about their famous golf foursome names given to each. Bogey Bentley, Ronnie Sue Caroll Muskie and Gentleman Jim Robert´s! Your smile will be missed
Patrick Lewis
November 20, 2020
I always loved going into Roberts ... Jim always had a smile and he and his staff were always so helpful and kind. My sympathy to his family.
Jonette Beck
November 20, 2020
Jim was one of those rare people who was always there for everyone else, always involved in helping others. He gave, nurtured, and truly cared for others. His loss is ours, but God will be happy to have him home.
Vincent Goetz
November 20, 2020
Jim Roberts was one of the sweetest humans I have had a chance to know and share a bit of time with in my life. Rest in Peace dear man. My heartfelt condolences go out to to your loved ones. The children of Napa appreciated everything you did to make their lives brighter, building playgrounds in the community you loved so much.
Linda Bausch
November 20, 2020