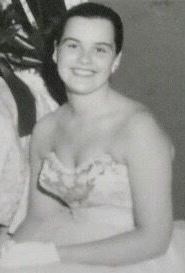 Janet Irene Francis was born March 28, 1936 to Mildred & Carl Harding and was the 4th out of six kids. She has a twin brother named John. The Hardings lived in North Dakota and eventually moved to Blooming Prairie, MN.

Her mother was a school teacher at the local elementary school & her father was a farmer. Life was hard, as they did not have central heat. She described going to sleep with a hot water bottle at the foot of the bed and would wake up finding it frozen solid. Her Dad Carl was a bit of a dandy and had a bad temper which made life a lot harder for everyone.

Janet graduated from High School and went to nursing school at "St. Mary's school of nursing at the Mayo Clinic (30 minutes from Blooming Prairie). She then moved to LA and lived with her sister Joanne & her husband.

Janet worked as an RN (wearing all white nurses uniform, with her jet back hair pinned in a bun & a nursing cap perched on top her head with the perfect shade of red lipstick) at LA Children's hospital on the night shift where she met her husband Marc who was a pediatric resident at the time.

They dated, were engaged & because of family disapproval (because Janet was Catholic & Marc was Jewish) they decided to wed in Las Vegas at the "little Chapel of Love". They moved to Salt Lake City, Utah and were re-married in a Catholic Church so they could raise their kids with a religion.

3 children later, Marc was drafted into the Air Force (where the 4th child and their only son Wallace was born), and her 3rd daughter developed a brain tumor which required surgery. She recovered.

The family returned to Salt Lake City but Marc's practice did not return. The family eventually relocated to Napa, California where Janet spent the remainder 48 years raising her children with her husband Marc & living out the remainder of her life. She worked as a nursing home administrator for many years and taught vocational classes at Napa High. She volunteered on the Napa Swim Club as well.

Janet is survived by her 4 children Josephine, Theresa, Jacqueline, Wallace & her 5 grand children; Sarah 27, Mark 25, Bailey 19, Samantha 6 & Christian 6. Janet was the type of person that would laugh when her own toddler daughter completely emptied the linen closet onto the ground & then she would take a picture because it was " too cute", or she would lay on the ground and play with her grand children.

She started running marathons at age 55 & ran for Napa City Council because she wanted to preserve what was great about Napa. She battled Breast cancer and soundly defeated it.

During that difficult period, she fell in Love with her husband all over again because he took such good care of her during that very difficult time of her life. Janet had always had the best sense of humor with the most contagious laugh... Family was everything to her.

Janet's favorite song was "We Are Family" by Sister Sledge & she loved to have impromptu dance parties in her living room. One of Janet's favorite people was her Grandfather Eugene. Janet was intelligent, beautiful & funny all in one.

To plant trees in memory, please visit our Sympathy Store.
Published by Napa Valley Register on Jan. 3, 2021.
MEMORIAL EVENTS
No memorial events are currently scheduled.
To offer your sympathy during this difficult time, you can now have memorial trees planted in a National Forest in memory of your loved one.
GUEST BOOK
5 Entries
I met Janet when I first started in the nursing field. She made me want to continue my education. Janet was always full of love and laughter. She will be sorely missed. Fortunately her daughter Tess fell into my life several years ago and together we share fun stories about mom.
Rick Cabral
January 10, 2021
Condolences to the family.
Maria Ramirez
January 7, 2021
Deep Sympathy Wally and all Francis family
aNna rybaT
January 4, 2021
Janet will live forever in our memories and our stories. She was loving, fun, intelligent and a dear friend. She will be missed. We are sorry for your loss.
Patricia Pignanelli
January 3, 2021
I loved your Mother & Father-waiting on them at Food Fair, then Vallergas, was my honor. Your Mother always had a smile and we enjoyed our short, but plentiful, conversations, over the years. I will always think of the mischievous glint in her eyes in my memories Prayers to all of you
Molly Towey
January 3, 2021