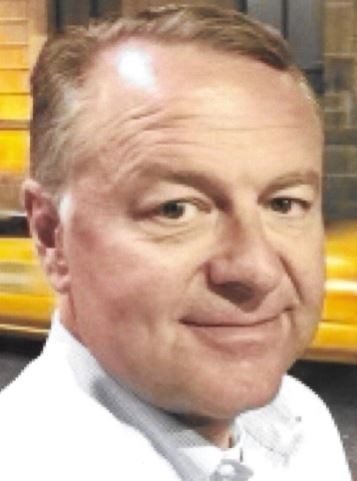 Scott Benjamin Goldie, 56, passed away Thursday, June 10, 2021 in San Jose, California. An open house reception will be held on the afternoon of Sunday, July 18, 2021 at his parent's home in Cle Elum, Wa. For more details, please email [email protected]

Scott was born January 13, 1965 in Deer Lodge, Montana. When he was young, his family moved to Port Angeles, Washington and it was there that he grew up and attended the local schools. He graduated from Port Angeles High School and went on to attend the International School of Business, studying for part of his time in Nairobi, Kenya. He graduated with his bachelor's degree in International Business and later earned his master's degree from Northwestern University in Chicago.

From a very young age, Scott had a knack for being an entrepreneur. He started his first business - SBG Enterprises - at the age of 14, owning and operating cigarette vending machines. He would later go on to build relationships across the globe with investors and business partners, opening many doors for his entrepreneurial talents. Scott had his hand in many enterprises including being a founding partner in Brookstreet Development in Newport Beach, California, Coastal Nursery in Santa Cruz and founder and CEO of Golden Seed, the first cannabis company in the United States to be qualified by the SEC to sell stock in a private company to the general public.

Scott had a love of trains - going back to when he would ride with his grandfather who was an engineer for the Milwaukee Railroad - and it was this passion that helped close the deal to purchase the Napa Valley Wine Train. Through this venture, Scott helped to revitalize Napa, California through the development of the Rail Art District wherein large murals were painted on the buildings along the train's route.

Scott never slowed down and when he wasn't working, you could find him riding his Harley, singing karaoke or enjoying a martini and a good cigar with his friends.

The family wishes to express their sincere thanks to the doctors, nurses and staff of the Santa Clara Valley Medical Center for the exceptional care they provided to Scott. To that end, memorial contributions in Scott's honor are suggested to the Valley Medical Center Foundation, online at www.vmcfoundation.org or 2400 Clove Drive, San Jose, CA 95128.

Johnston & Williams Funeral Home and Crematory of Cle Elum has been entrusted with assisting the family with local arrangements. You are invited to leave condolences for the family at www.johnston-williams.com

Published by Napa Valley Register on Jun. 27, 2021.
To plant trees in memory, please visit our Sympathy Store.
MEMORIAL EVENTS
To offer your sympathy during this difficult time, you can now have memorial trees planted in a National Forest in memory of your loved one.
Funeral services provided by:
Johnston & Williams Funeral Home & Crematory - Cle Elum
MAKE A DONATION
MEMORIES & CONDOLENCES
Sponsored by Johnston & Williams Funeral Home & Crematory - Cle Elum.
3 Entries
On behalf of the memberships of the Napa Valley Model Railroad Historical Society of Napa, CA and the Cascade Rail Foundation of South Cle Elum, WA, I wish to forward all of our deep condolences to his family, friends and Wine Train staff. I got to know Scott about 5 years ago after the ownership change at the Napa Valley Wine Train. Scott was gracious to our organization, hosting a NVMRHS membership dinner at the Wine Train's Commissary Building, supporting NVMRHS public outreach and education efforts in the Napa Valley, suggesting inclusion of a large operational model railroad display in a planned new Wine Train depot/hotel development in downtown Napa and quietly encouraging various non-profit historical organization efforts around the Napa Valley. I was also totally amazed by Scott's connection to the Milwaukee Road's (CMStP&P) Pacific Coast extension, with him telling me detailed stories about his grandfather as an electric locomotive engineer on the Rocky Mountain Division. Most vivid of the stories were of summer visits to relatives in Montana, including multiple times while growing up standing at trackside waiting for his grandfather to come by on a train. Scott told me that occasionally, his grandfather would see him standing at trackside and would stop his freight train just outside of Deer Lodge, Montana so that he could bring a young Scott up into the locomotive cab and ride with the locomotive crew those last few miles into the yard at Deer Lodge. Those stories showed his deep understanding of railroading history and operations, reflected in the continued success of the Napa Valley Wine Train's public profile. Scott's guidance and presence will be deeply missed. Sincerely - Wayne I. Monger President/member Board of Directors - Napa Valley Model Railroad Historical Society, Napa, CA Secretary/member Board of Directors - Cascade Rail Foundation, South Cle Elum, WA
Wayne I. Monger
Other
July 5, 2021
So sorry for the loss of Scott Goldie, he sounded like a man with much excitement around him, a place or person you would want to be around. GoldenSeed investor, owner.
Tammy Roe
Other
July 1, 2021
Very sorry and sad to hear of Scott´s passing. My sincere condolences to the family who I knew well.
Larry Andreson
Friend
June 30, 2021
Showing 1 - 3 of 3 results