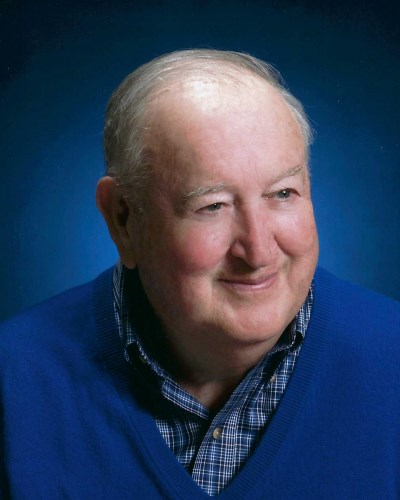 BORN
1930
DIED
2021
ABOUT
Highland Park High School
David James Evans, 91, of Naperville, passed away in the presence of family on Saturday, May 8, 2021. As he was known to family and friends, Dave was the son of the late John and Mary Evans and was born in New Brunswick, New Jersey, on August 8, 1930. He attended New Brunswick schools and graduated from Highland Park High School in 1949 where he was active in track & field.

Dave received his Bachelor of Arts degree from Seton Hall University in South Orange, New Jersey. He was awarded a track scholarship and had the honor of being named captain of the track team. He was exceptionally talented in the 200 yard dash and the 400 yard dash and participated in prestigious races such as the National Track and Field Championships. After college he enlisted in the US Army and served as special staff Sargent to the General at Camp Carson in Colorado Springs, CO. After his tenure with the military Dave began his notable career with Container Corporation/Jefferson Smurfit, where he worked as a Plant Manager and Executive for 45 years. He assumed positions of increasing responsibility throughout his years at Container Corporation and was transferred to different parts of the country, including PA, IN, and IL. He spent the last years of his life in Naperville, IL.

Dave, a talented athlete, and avid golfer spent many hours on the links; his dream realized when he traveled to Scotland and played St. Andrews golf course. He enjoyed reading about World War II and became quite an expert on the subject.

After retirement, he engaged in many volunteer activities, among these working with Kiwanis International performing service activities, including visiting local schools in Naperville talking to 4th graders about the history of WWII. Because of his interest in track and field, he spent years serving as a starter for various track meets at local Naperville schools and the Special Olympics. He also spent many hours volunteering at Edwards Hospital. He was a kind and caring person.

Dave and Gloria were long-time St. John's Episcopal Church members, located on Aurora Avenue in Naperville, IL. Following his wishes, cremation has taken place. He will be interred in the Ash Garden at St. John's. A memorial service will be held at a future date when family and friends can safely convene to celebrate Dave's life. Contributions can be made in David James Evans' honor as a Memorial gift to St. John's Episcopal Church.

Dave was a dearly loved father, Pop-Pop, and friend. He will be greatly missed by all.

Published by Naperville Sun on May 26, 2021.
To plant trees in memory, please visit the Sympathy Store.
MEMORIAL EVENTS
To offer your sympathy during this difficult time, you can now have memorial trees planted in a National Forest in memory of your loved one.
MAKE A DONATION
MEMORIES & CONDOLENCES
0 Entries
Be the first to post a memory or condolences.