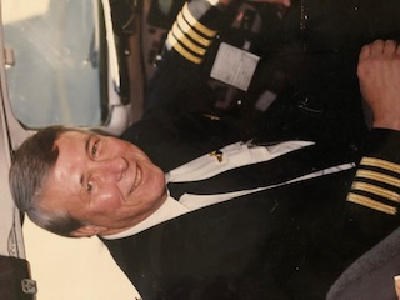 Jerry Vincent Marcinek, retired pilot and boat captain passed away on February 28, 2019 at the age of 79, after a long courageous battle with cancer.

Jerry is survived by his devoted wife, Linda, his son, Tim Marcinek, and his two step-daughters, April May and Dodie Sullivan, spouse Mike, his grandchild, Bailey and his beloved dogs, Lucy and Petunia Pie.

Jerry was born, January 6, 1940, in East St. Louis, Missouri, to Mary and Vincent Marcinek. Jerry graduated from East St. Louis Sr.High School in 1958 and from there he attended Southern Illinois University where he graduated in 1963 with a degree in Clinical Psychology. Following his college career Jerry attended the United States Air Force Pilot Training Program from 1963-1964, and was stationed in Seattle, Washington where he flew transport to the Artic and Southeast Asia. In 1968-1969, Jerry was a combat pilot in Vietnam as an Air Liaison Officer, to Fifth Special Forces Unit, Kon Tom,

Province, Vietnam. Jerry was discharged honorably in 1970, with distinguished Flying Cross, Air Metal with numerous clusters, Vietnamese Cross of Gallantry and Silver Star. After Jerry was honorably discharged he was hired by Northwest Airlines in 1970 to jump start his career as a pilot. in 1971, Jerry flew with Eastern Airlines as a Flight Officer until 1991. In 1991, Jerry was asked to be a Start-Up Pilot with Value Jet which later became AirTran until retirement in 2000. In addition, to his love of flying, Jerry enjoyed many hobbies and interest, especially sailing, traveling, gardening, happy hour at 5:00 p.m. and working at West Marine. In-fact, Jerry received his U.S. Coast Guard Captain's license in 1998, which he put to use immersing himself in corporate charters, at Dinner Key Marina, Coconut Grove, FL. While at West Marine and chartering his sail boat, Jerry made many lifelong friends in Pensacola, FL at the Grand Lagoon Yacht Club, Coconut Grove, FL and in Naples. Jerry made a point of beginning his day, just being on the water if possible,

watching the sunrise with a cup of coffee in hand and

starting every morning fresh. Prior to his passing, Jerry was honored to be a participant of Collier County Honor Flight, Mission 14 on November 4, 2017. Jerry was thankful to all those who provided him with comfort, care and compassion at Moffitt and VITAS Hospice Unit.

In keeping with Jerry's wishes, in lieu of flowers, donations can be made to Moffitt Cancer Research or Collier County Honor Flight.

Arrangements are in care of National Cremation and Burial Society.

To plant trees in memory, please visit our Sympathy Store.
Published by Naples Daily News on Mar. 3, 2019.
MEMORIAL EVENTS
No memorial events are currently scheduled.
To offer your sympathy during this difficult time, you can now have memorial trees planted in a National Forest in memory of your loved one.
MAKE A DONATION
MEMORIES & CONDOLENCES
7 Entries
Marcia Koslow Oberdorfer
February 28, 2020
Patricia Burnett
February 27, 2020
Linda, I am so sorry about your loss. I just heard about his passing and know he suffered a long time. I was a classmate but didn't know him well. My prayers go out to you & your family at this difficult time.
SHIRLEY WAIDMANN
June 2, 2019
Just learned of this. I was a classmate and friend of Jerry's and wish to offer my condolences to his family. Marcia Koslow Oberdorfer
Marcia Koslow Oberdorfer
April 23, 2019
Linda: I am so very sorry for your loss. May the God of comfort be with you in your time of need.
MT
March 6, 2019
MAY THE THOUGHT OF KNOWING THAT FAMILY AND FRIENDS SHARE IN YOUR GRIEF BRING YOU A MEASURE OF COMFORT,PLEASE READ PROV 17:17
CKT
March 5, 2019
I was introduced to Jerry by one of my co-workers, Nancy [who, unfortunately, has also passed]. She went to high school with Jerry. When we were invited to one of the young attorney's wedding in Atlanta, Jerry put us up at his house in Dunwoody and squired us around to all the sights. We had a glorious time and Nancy and I felt like princesses. Jerry and I stayed in touch -- sent jokes to each other, talked politics, commiserated about our various maladies, and corresponded for years. I will miss his charm, intelligence and great wit. He will be sorely missed.
Patricia Burnett
March 3, 2019
Showing 1 - 7 of 7 results