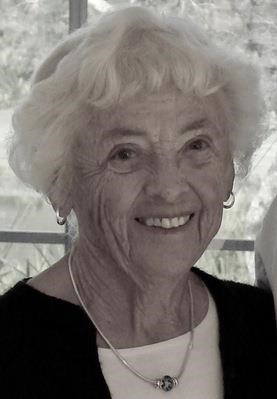 Naples - Joan Merritt Ireland, formerly of Fairfield, CT, died in Naples, Florida, early the morning of July 21st. She was born on May 10th, 1924 in the town of Montague City, MA, the second of two daughters, to Theodore Wellington Merritt and Martha Haley Merritt. She attended Bates College, where she met Elwood Fremont Ireland, her beloved husband of almost 70 years. His medical career took them from Boston to Germany, and finally to Fairfield where they settled for many years to raise their five children. Upon retirement, they sailed south down the length of the Intracoastal Waterway and eventually settled in Naples, first at Colliers Reserve and then at Moorings Park, where they enjoyed the friends and fun of Florida for almost 30 years.

Joan dedicated her life to her family and to her various communities. Everywhere she lived, she enthusiastically joined and then spear-headed countless worthy volunteer efforts. For many years she worked closely with the Junior League, the Near and Far Aid association, and the Bridgeport Hospital Foundation, just to name a few, to improve the Fairfield County community and beyond. When it came to fund-raising, she was a force to be reckoned with.

Joan's family and friends remember her as a thoughtful and generous friend. She was a knitter extraordinaire and basketmaker, two of the many hobbies she shared with Bud over the years. She was always a fabulous cook, an avid reader, and a woman who always strived to be informed. She was notably a meticulous organizer and a fierce competitor. She skied enthusiastically, played hours of tennis and was a student of golf and bridge. She and Bud loved their frequent sailing ventures on Long Island Sound and beyond.

Joan was predeceased by her husband, Elwood (Bud) Ireland, her older sister, Frances Labombarde, and her eldest son David Merritt Ireland. Joan is survived by her daughter, Jane Silvestro, Jane's husband Brian and their four sons Michael, James, Tyler and John; her son John, his wife Chris and their daughters, Kate and Jenny (Miller); her son Doug, his wife Mary and his four children Haley, Jack, Billy and Jo and her son Elwood and his two daughters Noelle and Helen. Joan was also great grandmother to five - Brooke and Ben Silvestro, Alma Silvestro, and Blakely and Hudson Miller.

In lieu of flowers, gifts in memory of Joan may be made to the Bridgeport Hospital Foundation, 267 Grant Street, Bridgeport, CT 06610. You may also make a gift online at: https://foundation.bridgeporthospital.org/donate. Locally, gifts may be made to the Moorings Park Foundation, a cause that Joan fervently supported. The address is 120 Moorings Park Dr. Naples, FL 34105


To plant trees in memory, please visit our Sympathy Store.
Published by Naples Daily News on Jul. 31, 2019.
MEMORIAL EVENTS
No memorial events are currently scheduled.
To offer your sympathy during this difficult time, you can now have memorial trees planted in a National Forest in memory of your loved one.
Funeral services provided by:
Legacy Options LLC - Naples
MAKE A DONATION
MEMORIES & CONDOLENCES
Sponsored by Legacy Options LLC - Naples.
2 Entries
I am so sorry to just now read this about . She and your Dad were friends of my parents for years and both went to college with my Mom. My thoughts are with the whole Ireland family at this time.
Leslie Newing
July 31, 2019
As the days and weeks pass, and as you return to life's routine, may you continue to feel comforted by the love and support of family and friends.
Susie & Keith Haydon
July 30, 2019
Showing 1 - 2 of 2 results