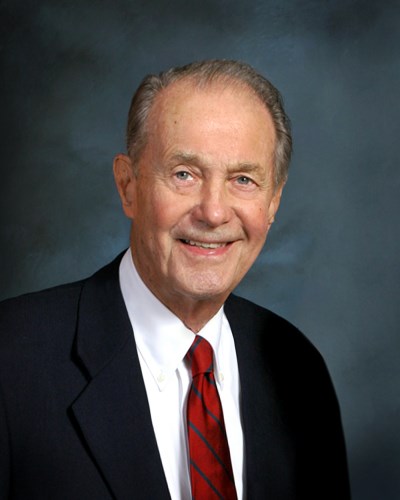 William E. Chipman was born in Easton, PA on April 23, 1924, the son of John S. Chipman and Emilie Michler Zulick. After public schooling, he graduated from Phillips Academy, Andover, MA in 1943, attended Bates College and Yale University in the Navy V-12, and graduated from the University of California, Berkeley after his ship was decommissioned in Bremerton, WA in 1946.

He returned east after college and joined the hosiery firm, Chas Chipman Sons Co., served as President until its merger to form Chipman-Union Mfg. Co. in 1972, and continued as Chairman of the Board until retirement in 1985. He was active in the National Assn of Hosiery Mfgs serving as President in 1979-80. As a member of The Union League Club of New York, he was active on its Board of Governors.

Golf and fishing were his pleasures, and he enjoyed membership in Pine Valley Golf Club and Royal Poinciana Golf Club of Naples, FL. Fishing for trout, bonefish and Atlantic salmon were a lifetime love, and he travelled extensively for his sport.

His first marriage to June Fitzgerald ended with her death in 1986. He is survived by his loving wife of 29 years, Theresa Vadnais Chipman, step-daughter Patricia Clerkin, sister-in-law, Gloria Chipman, seven nieces and nephews and their children. His brothers Frank L. Chipman of Greenville, NC, and Thomas C. Zulick III of Easton, PA, and sister, Mary Elizabeth (Molly) Zulick, predeceased him.

There will be a memorial service at The Bower Chapel at Moorings Park on Wednesday, November 8, 2017, at 11:00 a.m., immediately followed by a reception in the Library at the Clubhouse at Moorings Park. A private graveside service will be held at the Easton Cemetery, in Easton, Pennsylvania.

In lieu of flowers, all friends are asked to let their memories serve as a memorial to this man.

To plant trees in memory, please visit our Sympathy Store.
Published by Naples Daily News from Nov. 5 to Nov. 6, 2017.
MEMORIAL EVENTS
Nov
8
Memorial service
11:00a.m.
The Bower Chapel at Moorings Park
, FL
Funeral services provided by:
Hodges Funeral Home at Naples Memorial Gardens
MAKE A DONATION
MEMORIES & CONDOLENCES
Sponsored by Hodges Funeral Home at Naples Memorial Gardens.
8 Entries
In memory of our Uncle Bill. He always held a warm place in our hearts, knowing he and my aunt had a long happy life together. May God welcome him in His loving arms.
Elaine Owens
Family
November 20, 2017
MAY THE THOIGHT OF KNOWING THAT FAMILY AND FRIENDS SHARE IN YOUR GRIEF BRING YOU A MEASURE OF COMFORT.PLEASE READ PROV 17:17
KELLEY
November 8, 2017
Sorry for your loss. May the family have peace and strength from Almighty God during this time.
Porter
November 7, 2017
What a wonderful gentleman and partner in business. Bill was one of the most important and influential person in my life in every way. Our families go back to the early 1900s. And I know of nothing but pleasant times and a great and wonderful relationship.
Sibley Bryan
Coworker
November 7, 2017
Eventually? All things merge into one, and
a river runs through it... My father-in-law
told me his brother Bill once cast a fly rod
across the room into a dog bowl. Two times
in a row. Uncle Bill was a master at the Sport
of Kings. He was an educated gentleman and
an international CEO, with offices in the Empire
State Building. But, he will always be remembered
by his nieces & nephews, for his performances as
Santa Claus at Chipman family Christmas parties.
Bob & Holly have said it perfectly. A true gentleman
leaving fabulous memories.
-Robert Scammell, Bucks County, PA
November 6, 2017
I have been so blessed to have had you in my life Uncle Bill! A true gentleman! Hugs and Love Forever!
Traill McCabe
November 5, 2017
I will remember Bill as a gracious gentleman with Old School breeding who was always kind to me.
He was always concerned about the upkeep of the Chipman Family mausoleum at Easton Cemetery.
Now he will Rest In Peace there with his family.
Mona Chipman
November 5, 2017
Our love and condolences to the Chipman family. Uncle Bill, a true gentleman, has given all of us many fabulous memories which will LIVE on and on in our hearts.
Love, Holly and Bob (and our family)
Holly and Bob Zulick
October 25, 2017
Showing 1 - 8 of 8 results