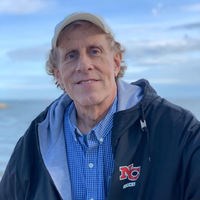 FUNERAL HOME
Leo P. Gallagher & Son Funeral Home
2900 Summer Street
Stamford, CT
Cameron Edwin Hutchins
Cameron Edwin Hutchins was a beloved husband, father, and friend remembered for his quick wit, integrity, and commitment to New Canaan. He died on Friday, July 9, 2021 after a courageous battle with cancer.
Born to Dan and Marilyn Hutchins in Summit, NJ; Cam spent the first years of his life in Mercer Island, WA before his family settled in New Canaan, CT in 1965. Cam met many of his lifelong friends at Center School, Saxe Middle School, and New Canaan High School; and continued to cultivate these connections through his work on NCHS reunions and the Class of 1977 Scholarship Fund.
Cam filled out his circle of childhood friends at the Roton Point Association, a beach club in Rowayton, CT; where he spent every summer and stayed actively involved as an adult. He was elected to the Roton Point Board of Directors in 1998 and had served ever since, first as Club Secretary and then as Club President.
Cam attended Amherst College, where he expanded his group of lifelong friends. He served as Class Secretary for 30 years, offering creative suggestions for classmates to share their life adventures and enjoyed planning several reunions for the Class of 1981.
After graduating from Amherst, Cam worked in advertising in New York before attending the Annenberg School of Communication at the University of Pennsylvania, where he met his future wife, Julia Portale. He spent several years at Citibank where he ran the customer interface for Direct Access, a telephone banking service; and Humanware, an incubator responsible for developing the online customer experience. Cam then moved back into advertising, working on creative teams for several large and small firms in New York and Connecticut.
His final career move brought him to Horizons National, an organization that advances educational equity through long-term partnerships with students, families, communities, and schools. At Horizons, Cam applied his writing and creative skills to support a mission close to his heart and found many kindred spirits among his colleagues; in his final years, he was rarely seen without his signature Horizons baseball cap.
As a longtime resident of New Canaan, Cam was deeply invested in his local community. He led efforts to protect a key part of Waveny Park from development, served as Chair of the New Canaan Conservation Commision, and advocated against the destruction of both the historic Center School and 1913 town library. He was a dedicated member of The Congregational Church of New Canaan, where he and Julia were married, and where he participated in various activities, including Bible study, an OG mission trip, taught a Sunday school class, and served a term as Deacon.
Most of all, Cam enjoyed - and excelled at - being a husband to Julia, and a father to Emma, Alex, and Lily. He was quick to volunteer his time and talents to his family - from his work as soccer team manager, post-prom organizer, high school "chauffeur", schoolwork helper, and unconditional cheerleader.
Cam is survived by his wife Julia Portale; children Emma Hutchins, Alex Hutchins, and Lily Shive; and sister Dani Hutchins Mollenkamp (Dave) and children Alicia, Marla, and Nils. He is also survived by dear friends Jon and Ann Vitti, who helped Cam through his most difficult chapter.
Throughout his life, Cam brought good humor, integrity, creativity, kindness, and details of all things big and small to his relationships with family, friends, colleagues, neighbors, and to the town and beach communities he loved.
A celebration of Cam's life will be held on Thursday, August 12, 2021 at 2:00 p.m. at The Congregational Church of New Canaan. The service will be live-streamed for those not able to attend in person https://vimeo.com/event/1145270 . A reception will follow at Roton Point Club in Rowayton, CT.
Memorial donations may be made to Horizons National (www.horizonsnational.org) or the Fairfield County Hospice House (www.fairfieldcountyhouse.org).

Published by Stamford Advocate & The Hour & New Canaan Advertiser on Jul. 17, 2021.
To plant trees in memory, please visit the Sympathy Store.
MEMORIAL EVENTS
Aug
12
Celebration of Life
2:00p.m.
The Congregational Church of New Canaan
CT
Funeral services provided by:
Leo P. Gallagher & Son Funeral Home
MAKE A DONATION
MEMORIES & CONDOLENCES
Sponsored by Leo P. Gallagher & Son Funeral Home.
2 Entries
I remember Cam being one the most dynamic personalities in our class... ahead of his time in a way. A great guy and to all his family and friends, I´m so sorry.
Anne Longley
Friend
July 27, 2021
Our deepest sympathies to the family of Cam. We are sorry for your loss. John and Janet
John Hand and Janet Ghattas
Friend
July 24, 2021
Showing 1 - 2 of 2 results