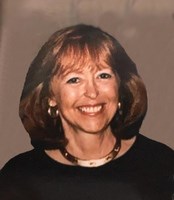 FUNERAL HOME
Hoyt Funeral Home
199 Main St
New Canaan, CT
Hazel Rich Hobbs
June 11, 1941 – June 20, 2021
Hazel Rich Hobbs of New Canaan, loving wife and mother of three, passed peacefully on June 20, 2021. She was born in Maryville, Tennessee on June 11, 1941 to James McGaughey Rich and Geneva Johnson Rich. Raised in Cranford, New Jersey with her sister Candy and brother James Jr. ("Bud"), she graduated from Cranford High School before matriculating for four years at Goucher College in Towson, Maryland with degrees in Art History and Education. There she met her future husband, Michael ("Mike") D. Hobbs, who was a student at nearby Johns Hopkins University. Hazel and Mike celebrated their 57th wedding anniversary on December 28, 2020.
They spent the first four years of their married lives in the U.S. Air Force, moving from Texas to Illinois, where Hazel began her career in education with her first teaching job. They then moved to duty assignments in Georgia, Germany and Southern California while welcoming their first two sons, Mike, Jr. and Scott. Upon Mike's discharge from the service, he and Hazel moved their family to Mike's hometown of New Canaan where he became the President of the construction firm Hobbs Inc. Their third son, Ian, was born shortly thereafter.
Hazel devoted the next five years to getting her young family launched and commencing a lifetime of volunteer service. She was a founding board member of the still thriving First Presbyterian Nursery School in New Canaan and was an officer of the Center School, Saxe and NCHS PFA's. She made a documentary movie explaining the data-driven, personalized curriculum Principal Dr. Steve Rubin was introducing at Center School. The documentary was favorably reviewed in Newsweek magazine. Dr. Rubin recruited her to join the Center School faculty as a Second Grade teacher and later serve as the school-wide writing coordinator.
Several years later Hazel was hired as Principal of New Lebanon Elementary School in Greenwich, and three years after that, as Principal of the larger Hamilton Avenue School in the Chickahominy Section of Greenwich. There she achieved remarkable results with her faculty and students. Her students regularly competed successfully for the top test results among the nine elementary schools in the town. She also raised private donations to make dramatic capital improvements and initiated a Saturday academic enrichment academy. At the end of her 16-year tenure in Greenwich, both the state and town recognized her with proclamations, presented her with the key to the city, and had a "Hazel Hobbs Day" designated by the town. She also received the BRAVO Award from the Greenwich YWCA. She then accepted the position as the founding headmistress of Pear Tree Point School in Darien. There she designed and oversaw construction of the buildings, developed the curriculum, hired the administration and faculty, recruited the students and reprised the impressive educational outcomes from her public school days for five years.
While teaching and serving as a headmistress, she earned her MAT at Manhattanville College and completed the coursework for her doctorate from Columbia Teachers College. She ran professional development workshops for teachers in the eastern U.S., served as an informal advisor to the U. S. Assistant Secretary of Education, was the third member of the founding board of Stepping Stones Museum for Children in Norwalk, and at the time of her retirement from the board, was the longest serving member. She also leveraged her lifetime in education by serving on the New Canaan Board of Education for multiple terms, including three terms as Board Chair. When she stepped down, she was honored in a special ceremony by the Superintendent, the Board, the teachers, parents and students for her extraordinary contributions. She was also honored with a town proclamation, given the Board of Ed Chair's Gavel and recognized with a "Hazel Hobbs Day" in New Canaan. In addition she served passionately on the boards of the New Canaan Historical Society, the New Canaan Library, Family Centers, the Lone Pine Educational Foundation and received both the New Canaan Community Foundation Spirit of New Canaan Award and AAUW Woman of the Year Award. One of her happiest duties was officiating at literally hundreds of weddings during a multi-decade tenure as Justice of the Peace.
While deeply committed to the New Canaan and Fairfield County communities, Hazel particularly loved her large and close family. She planned, curated and led trips for family members all over the planet, inculcating a passion for travel, and a deeper acceptance and understanding of different people and cultures. Hazel was an extraordinary woman, daughter, sister, wife, sister-in-law, mother, mother-in-law, grandmother, educator, contributing citizen and friend to many, who lived a life marked by excellence in everything to which she directed her formidable intellect and energy.
Hazel is survived by her husband Mike, sons Mike Jr. (Ginny), Scott (Lisa), Ian (Diane), and grandchildren Evelyn, Ted, Virginia, Jack, Charlie, Ellie, Holden, Shea, Tess and Faith, each of whom is convinced that they are "Grandma's favorite." She is also survived by her sister, Candy Rich DiSabatino (Jim), her brother, Bud Rich (Carol), brother-in-law Ned (Lissa), and many nieces, nephews, and their children.
A service of celebration of the resurrection and in thanksgiving for the life of Hazel will be held on June 26, 2021 at St. Mark's Episcopal Church, 111 Oenoke Ridge, New Canaan CT at 11:00. A walk through visitation will be held on Friday, June 25, 2021 from 4:00-7:00 p.m. at Hoyt Funeral Home 199 Main Street, New Canaan, CT.
In lieu of flowers, the family welcomes memorial contributions to Waveny Care Center (www.waveny.org) or Family Centers [www.familycenters.org].
For online condolences please visit www.hoytfuneralhome.com

Published by New Canaan Advertiser on Jun. 22, 2021.
To plant trees in memory, please visit the Sympathy Store.
MEMORIAL EVENTS
Jun
25
Visitation
4:00p.m. - 7:00p.m.
Hoyt Funeral Home
199 Main St, New Canaan, CT
Jun
26
Memorial service
11:00a.m. - 12:00p.m.
St. Mark's Episcopal Church
111 Oenoke Ridge, New Canaan, CT
Funeral services provided by:
Hoyt Funeral Home
MAKE A DONATION
MEMORIES & CONDOLENCES
Sponsored by Hoyt Funeral Home.
10 Entries
My deepest sympathies to the entire Hobbs clan. Hazel was such a lovely lady. I will always remember her brightening the Center School community with her warmth, wisdom and kindness. She will be dearly missed by so many.
Lisa Hussey Whelan
July 9, 2021
To Mike, Scott, Ian and All Hobbs', I am so sorry to hear of Hazel's passing. What an amazing woman. Sending strength and peace to your family at this time. My Best, Sarah
Sarah Sullivan
Work
June 28, 2021
Mike and Family, So very sorry to hear of your loss. Thinking of you and your family and sending love, Sarah
Sarah W DeCew
June 23, 2021
You knocked the cover off the ball. Linda and I send our condolences and thoughts and prayers to Mike and the family. Tony Brooks
Linda and Tony Brooks
Family
June 23, 2021
I'm so sad to hear of Hazel's passing. She was my principal at Hamilton Avenue School in Greenwich, and created a professional community that was rare and rich. She was a mentor and friend, who has been a silent part of my support system for many years as we both grew and changed. Deep sympathy to her family and friends - she will be missed.
Susan Snyder
Work
June 23, 2021
Mike and family - Dede and I are saddened by your loss and want you to know that you are in our thoughts and prayers.
Mike and Dede Brooks
Friend
June 23, 2021
May your family find peace in all the many ways you showed love.
Margot Waters Warner
Other
June 23, 2021
Hazel Hobbs was a wonderful leader and educator. We got to know her at Hamilton Avenue School in Greenwich. My son, John, received the Hazel Hobbs Award which was very meaningful to him! We enjoyed her friendship! May God welcome her home and bless your family!
Carl and Providence Zumbo
School
June 22, 2021
Mike, Ian, Diane....those of the Hobbs we know best, Our sincere and heartfelt condolences on your loss. Hazel was a wonderful woman who has just become another angel to watch over those she loved most. What a loss for our community. She was a dynamo and a wonderful and welcoming neighbor.
Bill and Mary Beth Fessler
Other
June 21, 2021
I had the privildge to meet and work as a class mother with Mrs. Hobbs at Hamilton Ave. School. Such a wonderful, understanding educator with lots of patient and commitment!!
Marisa Dalan
June 21, 2021
Showing 1 - 10 of 10 results