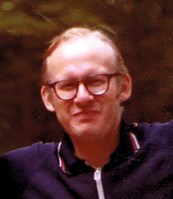 John D. Voorhies, 87, of Norwalk, Connecticut died peacefully in his sleep on September 15, 2021 at Brightview on New Canaan Senior Living Community in Norwalk. He was born November 26, 1933 in Windsor, CT, son of the late Robert Randolph and Alice Francena Myers Voorhies. The cause of death was cancer.
John was a modest man, but his academic pursuits are remarkable. In 1951 he graduated from Loomis Chaffee Preparatory School in Windsor, CT and went on to Princeton University where, in 1955, he was awarded an AB in Chemistry, in 1957 an MA in Analytical Chemistry, and in 1958 a PhD in Analytical Chemistry. After receiving his undergraduate degree from Princeton, John joined the Army Reserves.
For many years, John worked for American Cyanamid Company in Stamford, CT as a research chemist where he authored several technical publications and patents in the field of electrochemistry and received a Cyanamid Senior Educational Award to pursue post-doctoral research in the Chemical Engineering Department at Stanford University for the 1970-1971 academic year. In 1992, at a conference on urban planning and economic development in Beijing, China, he lectured on drinking water quality in the Northeastern United States. In 1987, John opened his water-testing business, Environmental Analysis Corporation, in New Canaan, providing chemical and bacteriological analyses of a wide range of water sources. And from 2009 – 2016, he served as an adjunct professor of chemistry at UCONN Stamford where he shared his love of science with his students.
Along with his deep interest and fascination with all things chemistry, there was his love of music and for his church community. In the early 1960s, John moved to New Canaan with his wife, Julia, where they lived for more than 50 years. At the center of John's life in New Canaan was his membership in the First Presbyterian Church where he expressed that passion for music. A tenor, he sang with the church choir for many years and relished participating in four European choir trips with the church. He served as a deacon and taught Sunday school. He was also a member of New Canaan's men's ensemble group, The Gentlemen Songsters. Before moving to Brightview in 2017, John and his wife enjoyed spending many of their summer weekends in Northfield, Massachusetts where his family has had a cottage since 1910. There he sang in the Northfield Town/Rustic Ridge Choir on Ridge Sunday for many years. The next time you hear the Brahms Requiem (he particularly loved the 6th movement) or Mozart's Ave Verum Corpus or Faure's Requiem, think of John; these were his favorites among the many great choral works he sang.
An avid reader with a deep interest in political issues, when John was well, he always enjoyed a spirited discussion concerning just about anything. And he loved his tennis; as he aged, he could no longer play, but he loved to watch tennis matches on TV.
John is survived by his devoted wife of 62 years, Julia Henderson Voorhies of Norwalk; his sister Janet Abel of Philadelphia; several nieces and nephews, several great nieces and nephews, and many dear friends from the church. He was predeceased by his sister Alice and his brother Bob.
A memorial service will be held at the First Presbyterian Church in New Canaan at the convenience of the family. The family extends special thanks to the staff at Brightview Senior Living in Norwalk, CT and to the Constellation Hospice nurses for their care and compassionate support during the final months of John's illness. The family is also grateful to the many wonderful aides John had throughout the years he spent at Brightview who kept him in good spirits. He will be remembered as quite the gentleman.
In lieu of flowers, please consider a donation to Constellation Hospice, 14 Westport Avenue, Norwalk, CT 06851 or to the First Presbyterian Church in New Canaan, 178 Oenoke Ridge, New Canaan, CT 06840.
Published by New Canaan Advertiser on Sep. 28, 2021.
To plant trees in memory, please visit the Sympathy Store.
MEMORIAL EVENTS
To offer your sympathy during this difficult time, you can now have memorial trees planted in a National Forest in memory of your loved one.
Funeral services provided by:
Nutmeg State Cremation
MAKE A DONATION
MEMORIES & CONDOLENCES
Sponsored by Nutmeg State Cremation.
0 Entries
Be the first to post a memory or condolences.