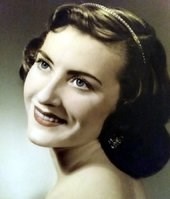 FUNERAL HOME
Leo P. Gallagher & Son Funeral Home
2900 Summer Street
Stamford, CT
Maureen O'Hara Clark
Maureen O'Hara Clark, longtime resident of Stamford, passed away on August 5, 2021 (coincidently on her husband of 56 years birthday.) She was 88 years young.
Born in Schenectady, NY, Maureen was the eldest child of Agnes and Donald O'Hara. A graduate of Bryant College, she was proud to start a career at General Electric Company where she met her future husband Jim Clark.
Maureen and Jim were married for 56 years, moving from Schenectady to Illinois, before settling into their dream "house on the lake" in Stamford, CT. She was a long time parishioner at Holy Spirit Church where she was Eucharistic Minister and active on the parish council. Maureen's Catholic faith and devotion brought her much comfort throughout life's ups and downs and she often relied on the power of prayer. She was dedicated to raising awareness for the needs of individuals with intellectual disabilities and was passionately involved with the Kennedy Center in Bridgeport.
Some of Maureen's favorite things were travelling the world, especially to her beloved Bermuda, Christmas with her large family, summer cocktails on the deck, "Club 194" hammock pictures and a good joke. She loved champagne, crab cakes, jewelry and flowers. She never left home without a pretty scarf, "it might be drafty," pocketbook and lipstick and was forever the beauty queen of her youth. She enjoyed dining out, movies, shopping and getting her hair done, but what brought her the most joy was her family. She cherished her 5 children, her son in laws, grandchildren, nieces and nephews, and her beloved brother and cousin. She considered herself "the luckiest woman in the world" to be surrounded by such a large, loving family.
She is survived by her daughters Kathleen Liftig (Rick), Eileen LoVerme (Cliff), Colleen Gillen (Andrew), Maureen Clark Newlove (John Mastoloni), her beloved son Edward Clark III. Her 9 grandchildren, Stephen LoVerme, David LoVerme (Kimberlee), Carolyn Gillen (Duncan Campbell), John Gillen, Kelly Gillen (Quentin Koopman), Kevin Liftig (Allison), Alyssa Mollins (Booby), Clark Newlove, Christian Newlove, along with her two great granddaughters Kaylee and Abby as well as close extended family.
Maureen was predeceased by her husband Edward (Jim) Clark Jr. and her beloved grandson Michael LoVerme. The thought of being reunited with them was a great comfort in her final moments.
Services will be at Leo P. Gallagher Funeral Home, Stamford on Sunday August 8, followed by a private mass at and burial.

Published by New Canaan Advertiser & Stamford Advocate on Aug. 6, 2021.
To plant trees in memory, please visit the Sympathy Store.
MEMORIAL EVENTS
To offer your sympathy during this difficult time, you can now have memorial trees planted in a National Forest in memory of your loved one.
Funeral services provided by:
Leo P. Gallagher & Son Funeral Home
MAKE A DONATION
MEMORIES & CONDOLENCES
Sponsored by Leo P. Gallagher & Son Funeral Home.
0 Entries
Be the first to post a memory or condolences.