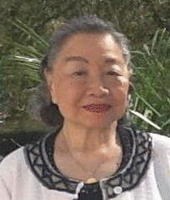 FUNERAL HOME
Wallingford Funeral Home
809 North Main Street Ext.
Wallingford, CT
Rita F. Hong
Rita F. Hong, 94, of Wallingford, CT, formerly of Queens, New York passed away peacefully, Tuesday, August 24, 2021 at Masonicare Health Center in Wallingford. She was the loving wife of the late Wing Hong of New York, who was the first man of Chinese descent to be honored as the Grand High Priest of the Grand Chapter of the New York State Royal Arch Masons. Rita, born in New York City, April 9, 1927, a third generation Chinese American and was the daughter of Edwin and Sarah (Lom) Lancoon. Her earlier days were spent working at the Brooklyn Naval Base as an administrative assistant. Rita's great passions were dancing, playing Wii bowling with her grandchildren, and playing Mah Jong with her friends and family. Her charitable involvement for the Chinese Center of Long Island, Chinese Circle of Long Island and Masonic life were her greatest pleasures. Rita is survived by her daughter and son-in-law Sara and Alain Robert of New Canaan, CT; her son Edwin Hong of Orlando, FL; and her grandchildren, Ian Robert of NYC and Victoria Hong of Orlando. A video of Rita's funeral service can be viewed on her online obituary page located at www.wallingfordfh.com. Interment was in Cypress Hills Cemetery in Flushing, NY. In lieu of flowers, gifts in her memory may be sent to the Masonic Charity Foundation, PO Box 70, Wallingford, CT 06492 and the Get About, PO Box 224, New Canaan, CT 06840.
Published by New Canaan Advertiser on Aug. 31, 2021.
To plant trees in memory, please visit the Sympathy Store.
MEMORIAL EVENTS
Sep
1
Funeral service
10:30a.m.
Chapel at Masonicare Health Center
CT
Funeral services provided by:
Wallingford Funeral Home
MAKE A DONATION
MEMORIES & CONDOLENCES
Sponsored by Wallingford Funeral Home.
5 Entries
Hurricane Rita earned the nickname due to her dynamic and ferocious love for family and fun. We have fond memories of the many visits with her and her elegance will grace our recollections forever.
Blessings to the family and love sent by,
Thea, Robert, Ariana, Bobby and Teddy
The Ross Family
Neighbor
September 1, 2021
Rita always had a bright smile, a flair for fashion and love for her family , We were grateful for our many shared experiences at the Robert home . Her legacy lives through her amazing children and grandchildren.
Nadine and David Chang
Friend
August 29, 2021
Rita Hong I remembered 1976 seeing your beautiful face in the Newspaper representing Chinese Center of Long Island amidst the Chinese New Year Celebration with the Firecrackers & Lion Dancers. My family & I became a member of CCLI from that. Thank you for being my friend. Rest in Peace, Rita.
Monica Lam
Friend
August 26, 2021
I remember your family from the beginning, when our parents would stand us up back to back. Rita lived a full life, she was so proud of her family. RIP Rita you earned it.
Bob Chan
Friend
August 26, 2021
Rita was such a wonderful and fun person to be with. I am pleased to have known her for over 60 + years. Our children grew up together and it was fun attending the CCLI activities. She and Wing stayed with us many times during the poker sessions. She will sorely be missed by all.
Gommie Chinn
Friend
August 26, 2021
Showing 1 - 5 of 5 results