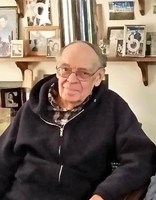 BORN
1935
DIED
2021
FUNERAL HOME
Tuell-McKee Funeral and Cremation Services of Bremerton - Bremerton
4843 Auto Center Way, Suite, A
Bremerton, WA
Gerald Hitchings
Former Grundy Center resident, Gerald Hitchings, passed away in Silverdale, Washington on Saturday February 27, 2021 at age 85.
Gerald was born in Melbourne, Iowa on November 13, 1935. He graduated from Fernald High School in Fernald, Iowa in 1954.
Gerald married Meredith McConnell on February 23, 1957. They resided in the Nevada, Iowa area, where Gerald worked for the Nevada Journal. In 1973 they moved to Grundy Center, Iowa, where he worked for the Spokesman Press and Collectors News. In 1995 they moved to Bremerton, Washington.
Gerald was an avid sports fan and he enjoyed watching his children and grandchildren participate in sports. He was a Chicago Cubs fan through thick and thin. Gerald was also a lifelong supporter of the Iowa Hawkeyes. Gerald loved the mountains and traveling back roads to experience nature and quiet places.
Gerald was preceded in death by his parents Earl and Ellen Hitchings. Gerald is survived by his wife Meredith of Bremerton, Washington; daughter LeAnn Backous of Colo, Iowa; son Kerry (Bonnie) of Kent, Washington; son Chris (Jody) of Poulsbo, Washington; son Kent (Edith) of Belfair, Washington and daughter Dawn Dwyer of Bremerton, Washington. He is also survived by sisters Marilyn Ruegsegger of West Liberty, Iowa and Marlys (Keith) Allen of Penticton, British Columbia, 11 grandchildren, numerous great-grandchildren, nieces and nephews.
A family service will be held later in the year. In lieu of flowers, donations may be made in Gerald's memory to the Rocky Mountain Conservancy at https://rmconservancy.org/join-or-give/donate/
Published by Nevada Journal from Mar. 4 to Mar. 11, 2021.
To plant trees in memory, please visit the Sympathy Store.
MEMORIAL EVENTS
To offer your sympathy during this difficult time, you can now have memorial trees planted in a National Forest in memory of your loved one.
Funeral services provided by:
Tuell-McKee Funeral and Cremation Services of Bremerton - Bremerton
MAKE A DONATION
MEMORIES & CONDOLENCES
5 Entries
I remember Gerald Hitchings from his days as a faithful church member at Bethany Presbyterian Church in Grundy Center, Iowa. Even as a child, I knew him to be a hardworking man of faith and a loving father, who adored his wife and was so proud of his family. He was humble and kind, and I am grateful to have known such a fine man. My prayers are with his family... May they find comfort in fond memories, and peace in the promise of the Life Everlasting.
Elizabeth Vanderwerf Jurenovich
Acquaintance
March 8, 2021
In loving memory of a wonderful person. We will love you and miss you always.
Mike Backous
Family
March 7, 2021
We are sorry to hear the passing of Gerald.
Brad & Mardee Clayton
March 7, 2021
Dad truly was a kind and gentle soul. He will be greatly missed but we will take comfort in many happy memories. Until we meet again!
Kent Hitchings
Son
March 6, 2021
I am deeply honored to have been Gerald's daughter in law for nearly 34 years. From the first time I met him I knew that I was in the presence of a kind, gentle, quiet man. I will miss him a great deal.
Edith Hitchings
Family
March 5, 2021
Showing 1 - 5 of 5 results