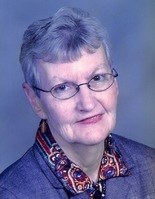 BORN
1937
DIED
2021
FUNERAL HOME
Rasmusson-Ryan Funeral Home & Crematory - Nevada
1418 Fawcett Parkway
Nevada, IA
Gretchen Ilo Kruse
Nevada - Gretchen Ilo Kruse, 83 of Nevada, died Thursday, January 21, 2021, at Windsor Manor in Nevada.
Gretchen was born August 30, 1937, in Nevada, the daughter of David Sketoe Tillotson and Mildred Holveck. On August 30, 1952, she was united in marriage to Gene Carroll Kruse at the Little Brown Church in Nashua. Gretchen worked as a teacher's aide and sold jewelry at JC Penney's.
Gretchen was a member of Memorial Lutheran Church in Nevada and served many years, including president, on the Story County Hospital Auxiliary. She enjoyed playing piano, playing for the First Christian Church in Nevada, crocheting, and was a great cook. Gretchen had an extensive collection of swans and nutcrackers.
Gretchen is survived by her children: Lyndon Gene Kruse of California, David Scott (Kelli) Kruse of Nevada, Charles Edward Kruse of Nevada, Kelly Jay (Kim) Kruse of California and Summer Dawn (Scott) McDaniel of Nevada; 18 grandchildren; numerous great-grandchildren; and her sister, Charlotte Cozine of Amarillo, TX. She was preceded in death by her parents; her husband; and two sons, Phillip Allen Kruse, and William Forrest Kruse.
Cremation has taken place and a service will be held at a later date.
In lieu of flowers, memorial contributions may be made to the Story County Hospital or Memorial Lutheran Church in memory of Gretchen.
Rasmusson-Ryan Funeral Home in Nevada is handling arrangements. Condolences may be sent to the family at www.rasmussonfh.com
Published by Nevada Journal from Jan. 23 to Jan. 28, 2021.
To plant trees in memory, please visit the Sympathy Store.
MEMORIAL EVENTS
To offer your sympathy during this difficult time, you can now have memorial trees planted in a National Forest in memory of your loved one.
Funeral services provided by:
Rasmusson-Ryan Funeral Home & Crematory - Nevada
MAKE A DONATION
MEMORIES & CONDOLENCES
1 Entry
To Gretchen's family, We are so sorry for your loss, we were neighbor's since 2007, she was a great lady, all of us enjoyed talking to her when she would be outside. She will be missed
Teresa Weatherman and family
January 23, 2021
Showing 1 - 1 of 1 results