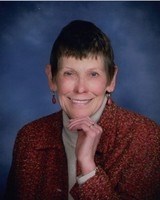 BORN
1942
DIED
2021
FUNERAL HOME
Sheridan Funeral Home and Cremations
1423 O'Dell Ct
Sheridan, WY
Jan Sterbenz
Jan Sterbenz passed away at her home with family after a short cancer illness on Saturday April 17, 2021.
Jan was born August 6, 1942 in New Castle, PA to Frederick L. and Julia (Markle) Taylor. Her early years were spent in Pennsylvania on a family farm and then the family lived briefly in various places in Iowa and Illinois until settling in Evanston, IL around the age of 12. She graduated from Evanston Township High School and attended Iowa State University, graduating in 1964 with a degree Child Development. After graduation she taught briefly at Slinker School in Des Moines, IA.
Jan met Frank Sterbenz Jr. while at Iowa State University and they were married May 9, 1964 at St. Theresa's Catholic Church in Des Moines, IA. They lived in Des Moines for five years where their three children were born. After spending two years in Kirksville, MO the family moved to Nevada, IA in 1975 where Frank opened a medical family practice office and Jan worked as the office manager for 15 years. In 1990, the family practice was closed, and the couple moved to Knoxville, IA where Frank had joined the VA Medical system. In 1993 they relocated with the VA to Sheridan, WY where she lived until her death.
Jan volunteered at the Holy Name Thrift store in Sheridan for many years and enjoyed seeing her 'regulars' and being with her co-workers during her volunteer days. She also had a soft heart for animals that needed new homes and helped provide a good 'retirement' life for numerous senior dogs and cats throughout the years. She always offered a helping hand to neighbors and friends whenever someone needed assistance. Jan looked forward to having her grandkids out annually for the Wyo Rodeo week and numerous camping trips to National Parks. She also loved playing board games and completing puzzles with family – especially many competitive games of Tri-ominos.
Jan is survived by her husband of 56 years, Frank, her son Scott Sterbenz (Genie) of Johnston, IA, her daughter Christy Sterbenz Filby of East Moline, IL, her sister Chris Sheffer (Steve) of Sumter, SC, and grandkids Shelby Sterbenz, Ben Sterbenz, Ethan Filby, Connor Sterbenz, Sami Sterbenz, Nolan Filby, Megan Sterbenz and Dylan Filby. She was preceded in death by her son, Brian Sterbenz.
Services for Jan were held earlier in Sheridan, Wyoming.
Memorials can be made to Holy Name Catholic Church, 259 E Works, Sheridan, WY 82801 or Hospice of the Bighorns, P.O. Box 391, Sheridan, WY 82801.
Online condolences can be made to www.sheridanfuneral.com. Arrangements are under the care of Sheridan Funeral Home.
Published by Nevada Journal from Apr. 26 to Apr. 29, 2021.
To plant trees in memory, please visit the Sympathy Store.
MEMORIAL EVENTS
To offer your sympathy during this difficult time, you can now have memorial trees planted in a National Forest in memory of your loved one.
Funeral services provided by:
Sheridan Funeral Home and Cremations
MAKE A DONATION
MEMORIES & CONDOLENCES
1 Entry
Very involved in Dr. sterbenz practice.
Sharon Howell
Coworker
May 1, 2021
Showing 1 - 1 of 1 results