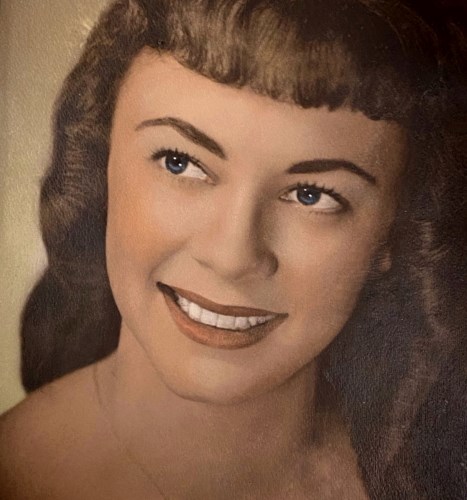 She is survived by her husband of 48 years, Benjamin Joseph Dziuba.

Vibrant, dramatic, beautiful, with a quick wit, unending childlike wonder, and impressive intelligence, life was always brighter with Lou Ann. She was a woman no one could forget.

Born in Winston Salem, N.C., she was the daughter of the late Clinton William and Shirley Kathryn DeHart Sawyer. On April 17, 1940, God decided to brighten the western mountains of North Carolina and Lou Ann was born.

She was the first of three Sawyer sisters who always remained extremely close. She moved to Southern California when she was 13 where she graduated high school and attended college.

Lou Ann and Ben married on July 3, 1973, and soon they settled on a farm in Tunkhannock. Lou Ann's love for her husband was undeniable, as was his for her. Ben and Lou Ann were the best of friends who loved to spend time together.

The farm hosted many impromptu social gatherings where friends would show up, laughter echoed, large amounts of food were prepared, and a Scrabble board would inevitably come out. Lou Ann also enjoyed music, art, sewing, gardening, anything Disney, and traveling.

Lou Ann worked as a teenager then started her career as a stewardess during the golden age of commercial flight before getting married and starting her family. Later, Lou Ann took over her mother's nursing registry and private duty care service in North Carolina. She grew the business from employing 30 nurses to more than 300 nurses before selling it and moving back to the beloved farm in Pennsylvania.

Lou Ann loved houses and turned that love into a job as a real estate agent for several years before retiring.

Lou Ann peacefully surrendered to her battle with dementia at her home on her farm with her husband and children at her side. Although this disease started slowly and increasingly affecting her years ago, Lou Ann lived a life that was not defined by it. Lou Ann's final years were spent at home with her family.

Lou Ann was always about her family. She was an amazing mother and daughter having taken care of her mother and stepfather in their last years. Despite the illness, she continued to bring light to all she spent time with. Countless smiles, laughter, kisses, adventures, and tender moments were shared with her family. Speech evaded her as the disease progressed, but one thing she was able to say right into the last few days was "I love you", and that really says it all.

She was preceded in death by her youngest son, Benjamin John Dziuba.

The family plans to gather at the farm for a celebration of her life when travel is safer and the weather is warmer. For now, feel free to share your memories of her with the family. There is nothing like a Lou Ann story.

Donations can be made in her honor to www.donate.rescueme.org. They helped Lou Ann find her canine companion, Snickers, whom she adored and never left her side.

Published by Wyoming County Examiner from Jan. 3 to Jan. 4, 2022.
To plant trees in memory, please visit the Sympathy Store.
MEMORIAL EVENTS
To offer your sympathy during this difficult time, you can now have memorial trees planted in a National Forest in memory of your loved one.
Funeral services provided by:
Sheldon-Kukuchka Funeral Home - Tunkhannock
MAKE A DONATION
MEMORIES & CONDOLENCES
Sponsored by Sheldon-Kukuchka Funeral Home - Tunkhannock.
0 Entries
Be the first to post a memory or condolences.