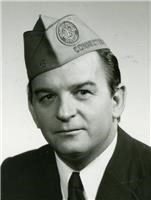 BORN
1923
DIED
2021
FUNERAL HOME
Erickson-Hansen Funeral Home
411 South Main Street
New Britain, CT 06051-3515
Emrick Prestash was born Nov. 11, 1923 and died May 5, 2021 at age 97 of natural causes.
Born in New Britain to Stephen and Catherine (Bonchak) Prestash, he was the seventh of eight children. Emrick served with Battery D 571st Anti Aircraft Artillery(AW) Battalion and was honorably discharged on March 17, 1946.
The Prestash family was among the very few that had six brothers serving in the Armed Forces at the same time during war time. His brother Andrew was killed in action on Dec. 18, 1944. Emrick married his high school sweetheart and church parishioner Lovey Waida in 1945. Lovey passed in 1968.
Emrick was formerly employed as a store manager at D&L and Weathervane stores. He was a devoted member of St. Mary's Ukrainian Orthodox Church.
He leaves to cherish his memories by his children, Andrea (John) Tolomea, Linda Kohl, Debra Gerardi (Charles Barbero); son-in-law, Doug Raineault; eleven grandchildren; and 15 great grandchildren. In addition to his wife, he was predeceased by two daughters, Donna Raineault and Pamela Baczewski, two sons-in-law, Frank Kohl and Michael Baczewski; and by his brothers, Myron, Walter, Steven, Anthony, Joseph, and sister Molly Mancini. He was also predeceased by his companion Anne Melnyk McAloon.
A private funeral service will be held at Erickson-Hansen Funeral Home in New Britain. Burial will be in St. Mary's Ukrainian Orthodox Church Cemetery. In lieu of flowers, memorial donations may be made to St. Mary's Ukrainian Orthodox Church Youth Ministry. Please share a memory of Emrick with the family in the online guest book at www.ericksonhansen.com
To plant trees in memory, please visit our Sympathy Store.
Published by The New Britain Herald from May 7 to May 11, 2021.
MEMORIAL EVENTS
No memorial events are currently scheduled.
To offer your sympathy during this difficult time, you can now have memorial trees planted in a National Forest in memory of your loved one.
Funeral services provided by:
Erickson-Hansen Funeral Home
MEMORIES & CONDOLENCES
Sponsored by Erickson-Hansen Funeral Home.
2 Entries
Grew up in my teen years living next door to the Prestash family..I remember Emerick as a hard working Dad..A beautiful artist, and his displays in the windows of the Lerner store in downtown New Britain.
I became very good friends with his oldest daughter Andi, which in fact we still areI also knew Linda very wellWe were neighbors and friends with the whole family.Up through 2020 Emerick and I shared Christmas greetings and in the last one he shared how he loved remembering old memories.. Rest In Peace. Chippy
Edwina G Zawacki
Friend
June 6, 2021
So sorry to hear of Emrick passing away. He accomplished much in his lifetime, despite the many hardships he had to endure. As a member of the "Greatest Generation" his foundation was rock solid. His beliefs were simple, Family, God and Church, Country, Work, and his Ukrainian Heritage. He gave of himself to better all of these areas. While bringing up his daughters he was an active member of St. Mary's Ukrainian O.C. He served in many capacities including President of the Church Council. He was a founding member and Pres. of the Ukrainian Cultural Committee. For his many years of service to his church he was awarded the Distinguished Service Award. Many of us can still remember him putting up window displays in old downtown New Britain. He had an artistic eye and was gifted in graphic arts. As an Army Vet he supported veteran causes and was an outstanding member of the Ukrainian American Veterans organization. He was Commander of UAV Post 15 in New Britain for many years and he was a Past National Commander of Ukrainian American Veterans of the USA. As such, he made friends and contacts throughout the USA.
Emrick was my fellow veteran, church member, cousin, and my friend. He will be missed. May his memory be eternal!
Michael P. Wowk
Friend
May 7, 2021