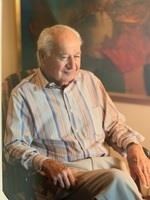 BORN
1921
DIED
2021
FUNERAL HOME
Brookside Memorial-The Albini Family Funeral Home
200 Benson Rd
Middlebury, CT
Lawrence (aka "DON LORENZO) Rivkin
May 9, 1921 – August 16, 2021
"Life Well Lived"
Larry Rivkin, May 9, 1921 – August 16, 2021, died peacefully at home, surrounded by his immediate family. A most loving husband to Janet (nee Levy), devoted and loving father to Joe, Nina (Randy) and April (Marcia), adoring Pepa to Jamie, Jason and Sarah, and "the girls" (Jessica, Teresa and Angie). He was a loving uncle to Judy (deceased) and sons Adam (Becky and sons Jacob, Max and Ryan) and Joshua (daughters Abigail and Emmy); to Barbara and Joel and daughters Rachel (Aaron and son Jaxon) and Hillary (Eddie and son Sidney); to his nephew Geoff (Lisa) and niece Naomi (Corky, deceased and son Evan). He was a special Pepa to Maya and Lilly, Jack and Scarlett, and Matthew. He held a special place in his heart for Charlette, his loving helper later in his life.
Larry was the middle child of Sadie and Herman Rivkin. His older, and beloved brother Sid (Sylvia) passed some years ago and his younger sister Eugenie (Sy), in 2015. They all instilled and maintained a strong sense of family, which came to include their children's spouses, cousins of all generations, and many friends. He loved and was loved as a husband, dad, pepa, son, brother, uncle, cousin, friend and law partner.
He left Brooklyn college in 1943 and became a WW II Army Air Corp Navigator, rising to the rank of Captain. While stationed in England, he wrote to his young niece Judy, "We're fighting for our respective countries to keep them free, but mostly we're fighting for the little people like you. We're fighting to preserve your heritage of freedom. We're fighting to make your future bright and we shall win."
He completed his tour of duty and returned for a second tour, navigating B-24 Liberators as part of the OSS and the "Carpetbaggers", completing more than 37 listed missions over enemy territory. His war decorations included the Distinguished Flying Cross, Air Medal with Oak Leaf Clusters, the Croix de Guerre with Palm, and five Bronze Stars. When asked about the war, he never played the 'hero', responding, "I was just doing my job". He returned home from WW II and founded Veterans Against Discrimination, which led to the formation of the first Civil Rights Congress in 1946.
He followed in the footsteps of his parents and older brother who were all lawyers, graduating Cum Laude from Brooklyn Law School in 1950. He often joked that he went to law school twice, as his mother graduated law school in 1921 while pregnant with him. He practiced law with Goldfarb & Fleece for 65 years as a Partner, Managing Partner and Of Counsel. He had a brilliant legal mind and was known as a fierce but fair negotiator; he was considered by his clients and partners to be the 'conscience of the firm'.
He had a life-long passion for learning and strongly valued education. While raising his family he served on the school boards of both the elementary and high school in Merrick, New York where he became president of the boards. In the late 1980's, he joined the Board of the Educational Alliance, the oldest Jewish settlement house in the country, where years earlier his mother taught cooking to newly arrived immigrants; he served as Vice-President and Trustee. He was also responsible for affecting the forgiveness of more than one million dollars of medical debt for veterans through the non-profit RIP Medical Debt. Later in life he served on the board of Kent Affordable Housing in Kent, Conn, where he lived part time for the past 35 years.
He was an avid baseball fan (first the Brooklyn Dodgers and then the NY Mets) and Giants football fan throughout his life. Larry and Janet's family dinners were well attended by family and friends. He was the grill master, affectionately known as Larry "Ribking".
For many of us, he was our true north, a man of impeccable integrity with an uncompromising moral compass. Larry was brilliant, articulate, pragmatic, tenacious, tender and big-hearted. A man of few words, when Larry spoke, we listened. His razor-sharp wit and comic timing would fill us with laughter. To have accomplished all that he accomplished in his 100 years, in business, civically and with his family, and celebrated for all of it, is a gift. To have kept his intellect and compassion, maybe not so much his hearing, is how we all should be so lucky to live. Larry's passing, while not unexpected at the age of 100, leaves an enormous hole. We were all fortunate to have Larry in our lives.
Larry believed that today's young people should focus on making an impact in the world as opposed to their personal needs. "We all have a responsibility to leave this earth a little bit better than it was when we got here".
Memorial contributions may be made in his name to either:
The Center for Constitutional Rights
Attention: Theda Jackson-Mau 666 Broadway, 7th Floor - New York, NY 10012
https://ccrjustice.org/donate
The Educational Alliance in New York City
https://edalliance.org/donate/
The Kent Memorial Library
P.O. Box 127
Kent, CT 06757
Arrangements: All services will be held privately. Brookside Memorial/The Albini Family Funeral Home, 200 Benson Road, Middlebury, CT has been entrusted with assisting the family.
For more info or to send an on-line condolence, please visit www.brooksidememorial.com
Published by New Milford Spectrum on Aug. 19, 2021.
To plant trees in memory, please visit the Sympathy Store.
MEMORIAL EVENTS
To offer your sympathy during this difficult time, you can now have memorial trees planted in a National Forest in memory of your loved one.
Funeral services provided by:
Brookside Memorial-The Albini Family Funeral Home
MAKE A DONATION
MEMORIES & CONDOLENCES
Sponsored by Brookside Memorial-The Albini Family Funeral Home.
0 Entries
Be the first to post a memory or condolences.