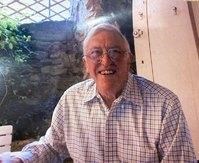 BORN
1929
DIED
2021
ABOUT
Kent School
FUNERAL HOME
Connecticut Cremations - Wallingford
273 South Elm Street
Wallingford, CT
Marc Elie DeVos
November 10, 1929 - November 27, 2021
Marc Elie DeVos, of Kent CT, passed on Saturday November 27th at the happy age of 92.
Marc was born on November 10, 1929 in Brussels, Belgium to Louis and Marthe DeVos. His family fled Brussels in 1940 when the Nazis invaded Belgium in WWII. Following a perilous drive through France, Spain and Portugal, he finally made passage to the United States, landing in New York City in 1941. This journey greatly affected Marc as a child, and he often reflected upon it in later life. He spoke no English upon arrival to the US, but enrolled at Kent School in Kent, CT and received the English Prize at graduation. He was also fluent in French, Spanish and Latin.
Marc attended Harvard University, where he was a member of the Sigma Alpha Epsilon fraternity, as well as the Speakers Club. He married Jean Carpenter of Scarsdale, NY and began working for the New York advertising agency, Young & Rubicam. Their marriage ended in divorce, and Marc later married Marilyn Anne Robitzek of Hartsdale, NY. He rose through the corporate ranks from the messenger room to becoming a vice president and ultimately managed Y&R offices in France, Spain and Belgium. He and his family returned to the States in 1976, settling in Kent where he and Marilyn operated Flanders Arms Bed & Breakfast and Flanders Realty.
Marc appreciated the finer things in life, be it a gourmet meal, an excellent wine or a John McPhee book. He read The New Yorker religiously. He collected first editions books, and always had a stack of tomes on his nightstand, awaiting his perusal. He enjoyed working with his hands and created a beautiful herringbone patio for their final home, as well as working on stereo equipment, model wooden boats and model railroads. He and Marilyn spent many peaceful hours assembling jigsaw puzzles in their later years. He loved vacationing in France. He was an avid fan of UConn Huskies woman's basketball.
Marc was happiest when his entire family was gathered together. He leaves Marilyn his devoted wife of 61 years, as well as his six children: Jacqueline "Heidi" DeVos, Eva DeVos-Jaggs (Mike), David DeVos, Suzanne DeVos-Cole (Todd), Louis DeVos (Ann) and Diane DeVos. He delighted in his nine grandchildren: Brooke DeVos, Phoebe DeVos-Cole, Ellie DeVos, Glynnis Killen Charles DeVos, Morgan Killen, Edward DeVos, Georges DeVos and Nicolas DeVos. Marc is also survived by his sister Anne Marie Overholser, his nephew Adrian Overholser and his niece, Octavia Overholser.
A memorial of Marc's life will be scheduled in the spring.
Published by New Milford Spectrum on Dec. 6, 2021.
To plant trees in memory, please visit the Sympathy Store.
MEMORIAL EVENTS
To offer your sympathy during this difficult time, you can now have memorial trees planted in a National Forest in memory of your loved one.
Funeral services provided by:
Connecticut Cremations - Wallingford
MAKE A DONATION
MEMORIES & CONDOLENCES
Sponsored by Connecticut Cremations - Wallingford.
1 Entry
Condolences to the DeVos family
Laurie Potter
December 10, 2021
Showing 1 - 1 of 1 results