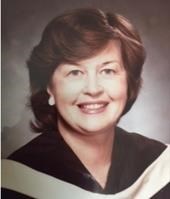 FUNERAL HOME
Lillis Funeral Home
58 Bridge Street
New Milford, CT
Mary Eileen Loughney
GRAND RAPIDS, Michigan. Mary Eileen Loughney, 90,passed away peacefully in the early hours of September 27, 2021. She leaves her brother, Michael; her daughter, Laura; her daughter, Lynn and her husband, Jeffrey (Burwinkel); her son, Richard and his wife, Siobhan; her grandchildren, Ryan, and his wife, Sarah (Spencer), Sean, and Collin Burwinkel, and Aidan and Lauren Loughney; and many dear friends. She joins her husband of 66 years, Dick Loughney; her father, Michael; and mother, Mary (May) Katherine; and her brother, David.
The daughter of Irish immigrants, Mary grew up in the Bronx, NY, and graduated from St. Nicholas of Tolentine High School. She attended the Grace Institute after graduation, and started working as a secretary in the Manhattan offices of the advertising agency Dancer Fitzgerald Sample during the 1950's.
Mary met her husband Dick while she was working at the glove counter of Macy's flagship store on 34th Street in New York City, at the height of the 1949 holiday shopping season. He asked her to join him for an ice cream soda on her break. They were married in the spring of 1953, at St. Nicholas of Tolentine Church in the Bronx, NY. The newlywed Loughneys purchased their first home in Oceanside, NY, where they soon became fixtures of their neighborhood.
They launched a geotechnical engineering contracting firm in 1978, where Mary was an executive for more than 10 years. As her children went off to college, Mary enrolled as a part-time student at Molloy College, eventually earning her bachelor's degree in sociology.
Mary was known for her compassion and for advocating on behalf of family and neighbors alike. She provided guidance, encouraged others in their life pursuits, and supported them with the challenges they were facing. There was always room for one more at the Loughneys' dinner table, and their Christmas Eve open house was a highlight of the season for 30 years.
In 1989, Mary and Dick moved to Lake Waramaug, CT, having spent many winter seasons ice skating, tobogganing and skiing there with their family. They delighted in hosting their children, grandchildren, extended family and friends over many holidays for 25 years. In 2014, they moved to Grand Rapids, MI, to be closer to family.
Mary loved to laugh, and we will miss her wit, along with the warmth of her smile. She had an engaging spirit, which she extended to family, friends and the many acquaintances she came to know. Mary's devotion to her husband, children, and grandchildren was without limit.
Family and friends will be received at the Lillis Funeral Home, 58 Bridge Street, New Milford, CT06776, on Sunday, November 21, 2021, from 2:00 PM to 4:00 PM. A mass of Christian burial will be celebrated on Monday, November 22, 2021, at 11:00 AM, at St. Bridget Church, 7 River Road, Cornwall Bridge, CT 06754, with interment immediately following the service.
Memorial contributions in honor of Mary Loughney may be made to the Lake Waramaug Task Force, 50 Cemetery Road, Warren, CT 06754, or contact them at: [email protected] 860 868 0331.
Published by Danbury News Times & Litchfield County Times & New Milford Spectrum on Nov. 11, 2021.
To plant trees in memory, please visit the Sympathy Store.
MEMORIAL EVENTS
Nov
21
Visitation
2:00p.m. - 4:00p.m.
Lillis Funeral Home
58 Bridge Street, New Milford, CT
Nov
22
Mass of Christian Burial
11:00a.m.
St. Bridget Church
7 River Road, Cornwall Bridge, CT
Nov
22
Interment
CT
Funeral services provided by:
Lillis Funeral Home
MAKE A DONATION
MEMORIES & CONDOLENCES
Sponsored by Lillis Funeral Home.
0 Entries
Be the first to post a memory or condolences.