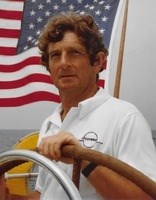 BORN
1941
DIED
2021
FUNERAL HOME
O'Neill-Hayes Funeral Home - Newport
465 Spring St.
Newport, RI
Geoffrey William Ewenson
Geoffrey William Ewenson, of Newport, passed away peacefully on July 15, 2021, with his wife, Patsy, by his side. He was born in Melbourne, Australia to Isabel and William Ewenson on November 06, 1941, and had one sister, Lorraine. When Geoff was a boy, his family split time between Melbourne and Blaire Gowrie on the Mornington Peninsula. As a youth and young man, Geoff's interests ranged from drumming in his school's military marching band to playing semi-professional Aussie rules football, and messing about in boats.
In 1967, at the age of 25, Geoff sailed aboard the Winston Churchill bound for Newport, RI, to watch and support Australia's Dame Pattie in that year's America's Cup competition. That circumnavigation (the wrong way via the Cape of Good Hope) proved to be a massive event in his life, as he met his wife of 52 years, Patricia Joan Dwyer upon arriving in Newport. Within a month of meeting his beloved Patsy, Geoff pulled out of the second half of the circumnavigation. Within a year they were engaged, within two they were married, and within three they had their first child, Geoffrey Michael Ewenson. Two more children, Ashley and Nicholas, followed.
As an adult he continued to actively race sailboats, mostly as a navigator in offshore races. He had a lot of success and was known to be a great shipmate; a highlight was winning the Newport to Bermuda Race in 1982 on Brigadoon III. Later, he continued to give back to the sport through his race committee work as a member of Ida Lewis Yacht Club and the Storm Trysail Club. He took great pride in passing along his love for being on the ocean and his passion for racing sailboats to his three children. He supported their sailing from the beginning at Ida Lewis Yacht Club, through school sailing, world championships, and Olympic trials.
Geoff's career was in marketing and sales, mostly in the construction, real estate, and marine industries. Over the years he followed job opportunities to Chicago, New Jersey and Fort Lauderdale, but he always returned to Newport. His colleagues and friends will remember him for his optimism and sense of humor. He was quick with a joke, gave out nicknames to most, and was prone to break into song.
Geoff is survived by his wife, Patsy, and his son Nick and daughter-in-law Meredith, of Newport, his daughter Ashley Phillips, son-in-law Oliver Phillips, and grandchildren Logan and Wiley, of Lake Tahoe, CA, and his daughter-in-law Mary of Annapolis, MD. He also leaves behind his sister, Lorraine Borley, and nephews, Cameron and Duncan Borley, in Australia. His extended family in the U.S. includes numerous in-laws, nieces, and nephews. Geoff is predeceased by his son Geoffrey Michael Ewenson, who passed away last fall.
Visiting hours will be held Sunday, July 25, from 12:00-2:00 pm at the O'Neill-Hayes Funeral Home, 465 Spring St, Newport. Burial will be private. In lieu of flowers, please consider making a donation to the EWE Spirit Fund at www.ewespirit.org
For online tributes, please visit www.oneillhayes.com.
Published by Newport Daily News from Jul. 20 to Jul. 22, 2021.
To plant trees in memory, please visit the Sympathy Store.
MEMORIAL EVENTS
Jul
25
Visitation
12:00p.m. - 2:00p.m.
O'Neill-Hayes Funeral Home - Newport
465 Spring St., Newport, RI
Funeral services provided by:
O'Neill-Hayes Funeral Home - Newport
MAKE A DONATION
MEMORIES & CONDOLENCES
Sponsored by O'Neill-Hayes Funeral Home - Newport.
0 Entries
Be the first to post a memory or condolences.