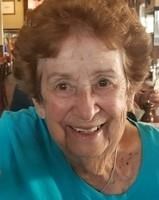 Helen A. Lawrence
Helen Arruda Lawrence, 98, of Middletown, Rhode Island, died peacefully at the St. Clare Home on August 1, 2020.
Helen was born in Middletown, RI to the late John E. Arruda and Maria P. Dutra. She grew up during the depression to parents who immigrated from the Azores. She lived on a dairy farm and always had a love for animals. She married Frank Lawrence of Newport, RI. They lived in Middletown, RI when it was farmland and a two-lane road. During their 63 years of marriage she raised her children and enjoyed being a homemaker. She was involved with Jesus Savior Church and school when her children were growing up. She liked to cook, bake, eat chocolates and watch romantic movies. After retirement Helen and Frank enjoyed traveling, spending time with their friends and family, babysitting, relaxing and going out to dinner. They traveled several times to the Azores to reconnect with family.
Helen is survived by her children, Francis "Frank" A. Lawrence, Jr. and his wife Olinda (Alves) Lawrence of Warwick, RI, Bev Lawrence and husband Jim Harmon of Fernandina Beach, FL, David J. Lawrence and his wife Jennifer O'Hora of Middletown, RI, and Helen Jean Lawrence of Jenson Beach, FL. She also leaves her sister, Dorothy Carpenter of Newport, eight grandchildren, Katherine (Kancler) Kaczmarek and husband Joseph of Jenson Beach, FL, Robert Kancler of Jenson Beach, Florida, Alanna Lawrence of Boston, MA, Julia Lawrence of Middletown, RI, Jonathan Lawrence and his wife Kathryn (Lincoln) of North Dighton, MA, William and Anthony Lawrence of Warwick RI, James Harmon and his wife Meghan (Smith) of Nassauville, FL and Dominic and Devin Kaczmarek, her two great-grandsons.
She was predeceased by her husband Frank and her three brothers, John E. Arruda, Jr., Alfred B. Arruda, and Frank Arruda.
A private Mass of Christian Burial was celebrated on Thursday, August 6, 2020, at Jesus Saviour Church in Newport. Interment took place at St. Columba Cemetery in Middletown.
Memorial donations may be made to Jesus Saviour Church, 509 Broadway, Newport, RI 02840. Additional information at www.memorialfuneralhome.com
To plant trees in memory, please visit our Sympathy Store.
Published by Newport Daily News from Aug. 6 to Aug. 8, 2020.
MEMORIAL EVENTS
No memorial events are currently scheduled.
To offer your sympathy during this difficult time, you can now have memorial trees planted in a National Forest in memory of your loved one.
MAKE A DONATION
MEMORIES & CONDOLENCES
0 Entries
Be the first to post a memory or condolences.