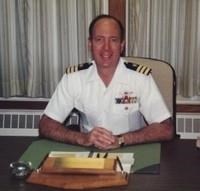 BORN
1941
DIED
2021
FUNERAL HOME
Connors Funeral Home
55 West Main Road
Portsmouth, RI
Philip A. Smith
Rising from the orange groves of the Southern California foothills, Philip A. Smith would go on to a successful 27-year career in the U.S. Navy, become a contented family man and eventually enjoy long and productive golden years.
He was born Aug. 16, 1941, at Queen of Angels hospital in Los Angeles to William A. Smith and Vivian A. (Chambers) Smith.
Coming of age against the backdrop of widespread adoption of the automobile, and helping out at his father's service station, the young Phil Smith developed an appreciation for cars while also taking a keen interest in their upkeep - a lifelong passion.
Gaining entry to the California Maritime Academy at Vallejo, the young man also showed an affinity for off-road navigation.
One of his first ships, USS Tulare AKA-112 was based out of Long Beach, some 50 miles west of his childhood home in Upland, far across the LA basin.
Here he would find his lifelong partner and the love of his life in the young Mary Beth Weatherwax, then working as a bank clerk in the Inland Empire town of Rialto.
Marriage quickly followed in 1965, in Las Vegas, before Pacific tours on board the USS Ozbourn DD-846 and USS Kennebec AO-36. He was next assigned to the Naval Scientific and Technical Intellligence Center in Washington, DC.
Destroyer school brought the young couple to Newport, Rhode Island. Their arrival in January 1971 was a fairly inauspicious one by all accounts, with complaints about the dreary Newport town and the equally dreary weather. After graduation he reported to the missile destroyer USS Harry E. Yarnell DLG-17 based in Newport.
Little did they know they had landed in a place that would become their home for almost all of their 50 remaining years together. Not Newport per se, but the nearby rural hamlet of Portsmouth, where a son was produced, Geoffrey, in 1971.
Portsmouth was home with his final sea duty assignment as Executive Officer and Commanding Officer of USS Damato DD-871 until the Navy politely suggested a move to the South Korean capital of Seoul in 1984. The two-year stint proved enriching and included side trips to the Philippines, Japan and China. An assignment at the Newport Naval War College on staff of the Naval Command College prompted a return to Newport in 1986.
Later life on Portsmouth's north end brought desired tranquility, especially in recent years, but also included the ability to travel and part-time jobs such as tour guide on summer cruises of Newport harbor.
He will be remembered for his service and for his essential goodness, and perhaps most of all for the great love and care he showed for those closest to him.
Philip Allen Smith is survived by his spouse of 55 years, Mary Beth Smith, and by his son Geoffrey T. Smith, daughter-in-law Sangmi Choi Smith, and grandson Evan J. Smith. He was 79 years old.
Calling hours will be held on Wednesday, July 28 from 3 - 6 PM at Connors Funeral Home, 55 West Main Rd., Portsmouth, RI.
Burial will be private.
In lieu of flowers, donations may be made to Visiting Nurse Home and Hospice of Portsmouth, RI.
Additional information available www.memorialfuneralhome.com
Published by Newport Daily News from Jul. 23 to Jul. 26, 2021.
To plant trees in memory, please visit the Sympathy Store.
MEMORIAL EVENTS
Jul
28
Calling hours
3:00p.m. - 6:00p.m.
Connors Funeral Home
55 West Main Road, Portsmouth, RI
Funeral services provided by:
Connors Funeral Home
MAKE A DONATION
MEMORIES & CONDOLENCES
Sponsored by Connors Funeral Home.
4 Entries
Phil was my oldest friend. We met as we prepared to go to the California Maritime Academy. We shared many adventures on both coasts. I met Mary Beth when she and Phil were dating. He was a dear and trusted friend who will be truly missed. Our love and sincere condolences now go to Mary Beth and her family.
Gary Cretser
Friend
July 26, 2021
We fondly remember our time together in Newport when I was assigned to USS Farragut. We share your grief.
John & Pat Donahue
July 25, 2021
Fondly remember Phil and Mary Beth from our times in Newport and Portsmouth. Great neighbors who provided kind support to us during Viet Nam tour. Our deepest sympathy to Mary Beth and Geoff.
Lynne and Paul Tobin
Friend
July 25, 2021
Phil is one of our oldest and dearest friends. We were fortunate to stand up with them at their marriage. Our son is named after Philip. Philip was a man of character, a good husband, father, friend, and citizen. We have wonderful memories of Phil and Mary Beth. Our love and condolences to MaryBeth and family.
Bill and Nancy Perry
Friend
July 24, 2021
Showing 1 - 4 of 4 results