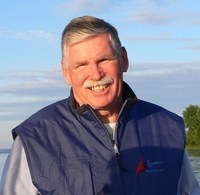 BORN
1939
DIED
2021
FUNERAL HOME
Haisley Funeral and Cremation Service
3015 Okeechobee Rd
Fort Pierce, FL
Ralph (Pete) Lawson III
Ralph (Pete) Lawson III, 81, died on July 18, 2021 after a short final struggle with Chronic Lymphocytic Leukemia – CLL. Born Ralph Lawson III in Boston on July 25, 1939, Pete was the oldest of three children of the late Ralph and Margy Lawson of Bristol, Providence, RI and Duxbury, MA. He attended Moses Brown, Nobles and Greenough and graduated from Rensselaer Polytechnic Institute with a degree in Engineering after serving three years in the US Army.
Pete spent his whole life on the sea. Sailing in Duxbury, MA as a child and working with the Grenfell Mission in Labrador as a teenager. He was committed to the sport of sailing as a competitor, organizer, technical developer, International Judge and sponsor of emerging RI sailors. Besides competing on Narragansett Bay in Pearson to J24 yachts, Pete did numerous SORCs, Admiral's Cup, and helped re-energized Team Racing in Hamble, England and Newport with the Patriot's Cup. He designed and implemented the first on board computers beginning with the '77 America's Cup working with Ted Hood and Ted Turner. His race management involvement extended from Newport to the Royal Yacht Squadron in Cowes, numerous international Swan regattas, and 17 years with the Yacht Club Costa Smeralda. His ability to provide race results in real time was appreciated by competitors and organizers alike. He served as Technical Officer for the International Maxi Association for 15 years. Pete began as an International Judge early in his sailing career and traveled to France, Brazil, Italy and across America. He especially enjoyed umpiring team racing with quick on the water decisions. He sponsored young, competitive RI sailors for out-of-state competitions. Most of these have gone on to fabulous sailing careers. He had leadership roles in the Narragansett Bay Yachting Association, United States Yacht Racing Union, RIISA and the Newport County Radio Club – a rediscovered and much enjoyed hobby with call sign W1LAB. He was a member of the New York Yacht Club and Storm Trysail Club.
As an industrial engineer, he helped develop the continuous bobbin for industrial knitting machines, streamline factory production, consolidate corporate information, and put personal computers in the hands of management. His management consulting helped companies asses the value of computing products, position them for future development and empower them to have personal access to corporate information.
Always a proper New Englander, he was honest, competent, and approached all challenges with integrity and very high standards. Working with Pete was demanding, empowering and it was always a joy to be on his team. He worked hard to raise us to his exacting standards and have some fun on the way.
Pete is survived by his wife, Marshall, his daughter Sara Lawson Viener her husband Adam and their three children Addison, Riley, and Jolie. A celebration of Pete's life will be held at a later date. Arrangements are under the direction of Haisley Funeral Home, Fort Pierce. An online guest book may be signed at www.haisleyfuneralhome.com
Published by Newport Daily News from Jul. 22 to Jul. 24, 2021.
To plant trees in memory, please visit the Sympathy Store.
MEMORIAL EVENTS
To offer your sympathy during this difficult time, you can now have memorial trees planted in a National Forest in memory of your loved one.
Funeral services provided by:
Haisley Funeral and Cremation Service
MAKE A DONATION
MEMORIES & CONDOLENCES
Sponsored by Haisley Funeral and Cremation Service.
1 Entry
Dear Marshall, You probably don´t remember me, but I used to pet sit your pups on Pojac Point many years ago. I am so sorry to hear about Mr Larson. My sister had forwarded the obituary to me. You were both very nice to me and I loved staying at your house with the beautiful pool. Again, I am so sorry. You are in my thoughts. Take care.
Beth Kelley
July 24, 2021
Showing 1 - 1 of 1 results