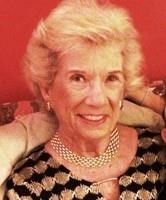 BORN
1938
DIED
2019
FUNERAL HOME
O'Neill-Hayes Funeral Home - Newport
465 Spring St.
Newport, RI
Roberta "Bobbie" (Lowy) Carpenter
Roberta Lowy Carpenter died Tuesday, May 14, 2019 in Newport, Rhode Island, where she had resided for 40 years. Bobbie, as she was known to her family and friends, was born in Chicago, Illinois December 14, 1938. She was the daughter of the late Walter H. Lowy and Virginia Pinney Lowy. Bobbie was also preceded in death by her husband, Ralph E. Carpenter.
She attended Glenbrook High School in Northbrook, Illinois, went to Pine Manor Junior College and received her Bachelor's degree from Columbia University. Bobbie stayed in New York City after graduating and worked at the NY Stock Exchange, Paul Stafford Associates and finally at Reynolds & Company where she met and worked for Ralph E. Carpenter, whom she would marry on July 11, 1978.
She and Ralph soon moved to Newport, where he restored and preserved landmark buildings. Their life together in Newport was quintessentially happy and engaged. After Ralph's death in 2009, Bobbie remained in their beloved "Parklands" home and continued to enjoy their many friends and the pleasures of living in Newport.
Bobbie, also affectionately known as 'Auntie Bobbie', was the centerpiece of her immediate family. She was generous, fun and adored by her family members. She gathered them all each Thanksgiving, continuing the hospitality she and Ralph had established so graciously prior to his death. Undaunted as the family grew to thirteen, Bobbie accommodated everyone in her house, preparing and serving delicious meals at a table always properly set with her beautiful china, linens and silver.
Once an avid tennis player and golfer, her favorite past times in recent years were playing duplicate bridge, completing the NY Times Sunday crossword puzzle in record time and watching Jeopardy! without fail.
Surviving Bobbie are her sister, Carol L. Roberts, and brother-in-law, Edgar J. Roberts, of Charlottesville, VA; nephews, Judd Roberts (Lisa Hellfrich) of Brooklyn, NY; James Roberts (Lisa Starr) of Brooklyn, NY; and niece, Victoria Roberts (Simon Piluski) of Putney, VT and great-nephew, Matthew Roberts, and great- nieces, Charlotte Roberts, Maya Piluski and Hazel Piluski.
She is also survived by her step-daughter, Cynthia Carpenter Linton of Chicago, a step-grandson, Robert Carpenter Linton, and three Linton great-grandchildren, Bryan, Evan and Sabrina.
In lieu of flowers, those wishing to do so may send contributions in Bobbie's name to The Redwood Library & Athenaeum, 50 Bellevue Avenue, Newport, RI 02840.
No formal services are planned. Family will gather later for a private celebration of her life.
Arrangements are by the O'Neill-Hayes Funeral Home. For online condolences, please visit www.oneillhayes.com.
Published by Newport Daily News from May 21 to May 23, 2019.
To plant trees in memory, please visit the Sympathy Store.
MEMORIAL EVENTS
To offer your sympathy during this difficult time, you can now have memorial trees planted in a National Forest in memory of your loved one.
Funeral services provided by:
O'Neill-Hayes Funeral Home - Newport
MAKE A DONATION
MEMORIES & CONDOLENCES
Sponsored by O'Neill-Hayes Funeral Home - Newport.
2 Entries
As you remember your love one, as God heals your broken hearts (Psalm 147:3), may your cherished memories bring you peace, comfort, and strength to endure.
May 24, 2019
Bobbie was a wonderful lady, and attended events supporting many of Newport's agencies and entities. At the Polo Ball, she always had a very interesting costume. She will be greatly missed.
LInda Phillips
May 23, 2019
Showing 1 - 2 of 2 results